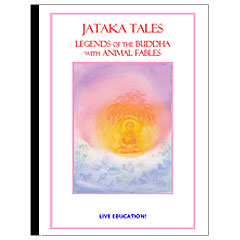 The Jataka Tales – Legends of the Buddha with Animal Fables

This is a collection of original retellings of stories of the Buddha interacting with animals to be used as an imaginative story material in teaching either language arts or arithmetic.

Sanjaya and the Elusive Wind Antelope

The Jataka Tales are delightful animal fables attributed to the Buddha. Often they are a story within a story: a pedagogical animal fable that acts as an illuminating allegory illustrating the solution to a social predicament that has arisen that prefaces the telling of the tale. The Jataka Tales are a unique blend of a saints legend (the Buddha, as the saint or perfected human being) with an animal story depicting some human failing, and for that reason are especially suited to the second grade. 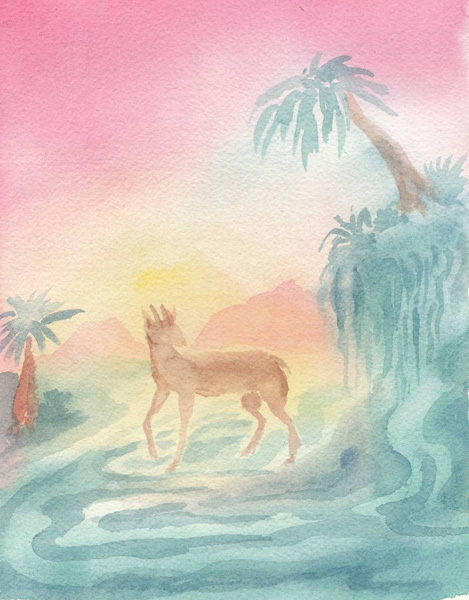 Sanjaya and the Elusive Wind Antelope

One time when a group of the brethren had returned from their journeys the Master asked if, while on their travels, they had witnessed anything that caused grave concerns. Reluctant to speak at first the brothers then relayed how perplexing it was to behold how many people brought suffering upon themselves when it was not at all necessary. “We saw an old woman who loved sweets. She had lost many teeth and yet refused to stop eating sweets though she knew it would cost her those teeth that remained,” said one of the brothers. “And another man” said a second brother, “loved intoxicating drink. His body had grown weak and sickly from the effects of this daily vice, yet he continued to consume it, and will soon perish from its poisonous effects.” A third brother spoke: “At the far end of the city there is a place where groups of men gather in dingy rooms and spend every day of their lives lying about in idleness. The rooms are filled with smoke that they breathe until they are lost in a dream. They are but half-alive and their days are filled with lethargy and illusion.” “Such is the nature of cravings,” commented the Enlightened One. Then he related this story:

Long ago, when Brahmadatta was the king of Benares, he had a gardener named Sanjaya, a man not only knowledgeable about the plants and trees, but wise in the ways of animals. One day, a very timid creature, a wind antelope ventured into the royal gardens. The king, witnessing the rare creature from his palace window, was amazed by the antelope’s grace and beauty. Several days later, the creature appeared again grazing among the meadows that adjoined the royal gardens. The king called for the gardener and inquired: “Sanjaya, have you noticed anything unusual in the royal parks and gardens?” “Only the wind antelope that has been grazing there,” he answered. “What a splendid creature is the wind antelope,” remarked the king, “is it possible to capture one?” Sanjaya, wise in the ways of the forest creatures answered: “No one has ever captured a wind antelope my king, but if you give me a dozen jars of honey, I will bring him right into his majesty’s palace.” So the king, intrigued by the challenge, ordered the royal cooks to relinquish their stores of honey to Sanjaya.

The next morning, Sanjaya went to the place where the wind antelope had last been seen, and spread honey upon the grasses. Then he hid himself. Before long, the antelope catching the scent of sweetness in the air approached the honeyed grasses. The creature cautiously ventured near, sniffing the air, its upright ears alert to any sound and began to taste the sweetened grasses, a little at first, but then consuming them with great relish. Every day Sanjaya returned to this meadow and drizzled honey on the grasses and every day the wind antelope returned to enjoy the treat.

After a week had passed Sanjaya no longer kept hidden, but ventured near the edge of the meadow of honey grass. At first the antelope was frightened by his presence and bounded away but soon, overcoming its timidity, returned to finish a bit of the sweet meal. After several days, sensing no danger, the antelope became used to the sight of the gardener, and stayed there until he had eaten his fill.

The next day brought the moment that Sanjaya had been waiting for. He strapped a great gourd filled with honey to his shoulders and stuffed sheaves of fresh grass in his belt. Then he made his way to the meadow where the antelope came daily. He plucked a handful of grass from his belt, dipped it in the honey and then dropped it to the ground. Next he walked a dozen paces toward the palace and again dropped a clump of honeyed grass upon the ground. Slowly he made his way to the palace leaving a trail of honey grass behind every dozen paces. He did not turn round, lest he frighten the creature, for he could hear the wind antelope following behind making its way from morsel to morsel. The antelope’s entire attention was directed head downwards to find the next sweet cluster and did not notice when the trail led right into the king’s palace. The doors slammed shut startling the creature into awareness of its surroundings. The wind antelope was captive! At the sight of the king and his men, the terrified beast dashed about the palace seeking escape. The king, pointing to the frightened young buck, exclaimed to those who were with him: “Witness this lesson. The wind antelope is said to be such a timid animal that it will not for an entire week, revisit a place where it has seen a human. And if it has been badly frightened it will avoid that place for the entirety of its life. Yet this poor creature’s cravings for honey have trapped it in a place that it would never venture near! Truly, my friends, there is nothing worse than cravings to ensnare any creature, either human or animal.” Then the king in his compassion for the frightened antelope ordered the doors to be opened, and the creature bounded forth to the freedom of his woodland home.