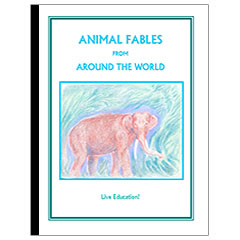 Animal Fables from Around the World

This companion volume to Teaching Fables contains more than 80 stories and fables from classical sources from various cultures around the world.

The Hedgehog and the Hare

A collection of 84 stories

One day the hare met the hedgehog and he said: “You wouldn’t be so bad, hedgehog, except that your legs are crooked, and you stumble.”

The hedgehog grew angry and said: “What are you laughing at? My crooked legs can run faster than your straight ones. Just let me go home for a moment, and then you and I shall run a race!”

The hedgehog went home and said to his wife: “I had an argument with the hare and we’re going to run a race.”

The hedgehog’s wife said: “You must be out of your mind! How can you run a race with the hare? His legs are nimble, while yours are crooked and slow!”

“His legs may be nimble,” replied the hedgehog, “but my wits are nimble. You have only to do as I tell you. Now, let us go to the field.”

They went to the plowed field where the hare was waiting.

“You hide at this end of the furrow,” said the hedgehog to his wife. “The hare and I will start from the other end. As soon as he begins to run I’ll turn around and go back. When he reaches this end you come out and say: ‘I’ve been waiting here a long time for you!’ He can’t tell one of us from the other, and he’ll think you are me.”

The hedgehog’s wife hid in the furrow, and the hare and the hedgehog started their race from the other end.

As soon as the hare began to run, the hedgehog turned back and hid in the furrow. When the hare reached the other end, what did he see?—There sat the hedgehog’s wife!

“I’ve been waiting for you a long time!” she said.

“What a miracle!” thought the hare, who could not tell her from her husband. “How could he have outrun me?”

The hare set off, and when he arrived at the other end, what did be see?—There sat the hedgehog!

“What a miracle!” thought the hare. “No matter how fast I run, he always outruns me!”

“All right!” said the hedgehog.

The hare hopped away as fast as he could, but again the hedgehog sat waiting at the end of the furrow.

And thus the hare continued hopping from one end of the furrow to the other until he was exhausted.

He finally gave up and said that henceforth he would never argue again.