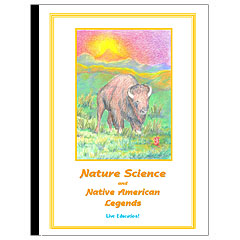 This book provides the teacher with stories for each day and lesson activities for the students in teaching a variety of nature phenomena when teaching a three week block on nature science.

The Native American Legends are appropriate learning material for the young student because the world depicted in these stories parallels the young child’s experience of the “personified world.” [See the “The Nature Story in Relation to Childhood Development” in Nature, Arithmetic and Form Drawing] In the legends, human beings, animals, trees, stone, rivers and sky are unified. The rocks live and breathe, the rivers sing; animals speak. In the unified world experience, one cannot make clear lines of distinction; one thing blends into another. At any moment, the man might be seen as an animal, or the animal—like coyote—might be a man. The snake becomes a rainbow; the humble spider hiding in tiny hollows beneath one’s foot is a world-creator. The young student’s consciousness and world view is filled with inklings and nuances of this mytho-poeic perceptual field that characterizes pre-industrial aboriginal societies. We will meet the child in his tender natural state of consciousness development if we teach nature science as narrative, metaphor and parable.

…The child only begins to realize himself as a being apart from the outer world between the ninth and tenth year. Hence, when he first comes to school, we must make all outer things appear as living beings. We shall not merely speak of the plants, but we shall speak of them as living beings, as holding converse with us and with each other in such a way that the child’s outlook on nature and man is filled with imagination.

For the modern consciousness possessed by the adult, the legends are often instructive as metaphors or parables. The teacher will receive a valuable education along with her young student.

Yet the ideas and phenomena of hard science are fully integrated into these studies. For example, the young student shall learn of how some of the soils of the earth are formed, the way moisture is evaporated and precipitates in various forms from the sky above; he will learn to perceive the bands of the Milky Way in the night sky and look for the Morning Star. What is unique about the Waldorf approach to nature studies for the young child is the way the ideas are conveyed: not as definitions and immobile concepts but living characterizations that can grow with the child. 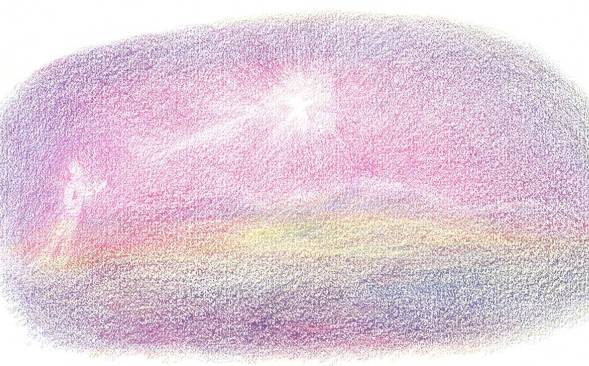 So-son-do-wah and the Morning Star Iroquois

For many seasons, So-son-do-wah, the great hunter, the one who chased the Sky Elk all the way from earth up into heavens, guarded well the lodge of the Dawn Maiden. The Dawn Maiden had rescued him from his fall when the Night Bird who helped him chase the Sky Elk shook the hunter from her wings. Dawn Maiden, who was as great as the sky, lifted the hunter into her arms before he fell upon the ground. In gratitude for saving his life, So-son-do-wah remained the guardian of her lodge. But in time, So-son-do-wah’s heart grew restless; he longed for the forests with its running brooks and the broad grassy meadows where the deer fed. The Dawn Maiden would not let him return to earth, but his longing grew with each new moon.

One morning, when rose feathered clouds shone along the eastern horizon, he looked longingly down to the earth. There, along the banks of a silvery river stood a maiden so beautiful that his heart began to quiver tenderly to look upon her. After that time he could not forget the River-Maiden, and every morning saw her face glowing in the mists that rose along the river bank.

It was springtime. Dawn Maiden was fast asleep. So-son-do-wah quietly stole away from the lodge and approached the earth. He entered into the soul of a bluebird and with a sweet song echoing from his throat flew over the grassy meadows beside the silvery river. The River Maiden heard the sweet song of the bluebird and her heart was filled with gladness that the spring had arrived. She followed the song from the meadow to the bank of the river and the little bird flew up to her and perched himself upon her shoulder, nestling his head against her cheek. She softly caressed the little bird, and his heart was filled with joy. As the sun neared he had to return to the Dawn Maiden’s lodge.

Several moons later, when summer was ready to arrive, and once again while the Dawn Maiden slept, So-son-do-wah returned to the earth. He entered into the soul of blackbird that was flying through the woodlands and over the treetops. The black bird perched upon an oak, then an elm, and then the ash tree, each time whistling its joy-song. At last a faint call came from the river. It was the voice of the River-Maiden. The blackbird circled above her; she held out her hand and the bird alighted there. She began to stroke the bird’s shining feathers and his heart was glad. He lifted his beak towards her face and tried to whisper, “It is I, So-son-do-wah, the one who will be your husband” but his voice was the “caw” of a bird and she could not hear him. The sun drew near. Flapping his wide wings he leapt from her hands and flew swiftly to the Dawn Maiden’s lodge.

Several moons later the time of autumn, when the trees shed their golden leaves, crept near. So-son-do-wah looked longingly toward the earth and as the Dawn Maiden slept, he entered the soul of a mighty hawk. Its piercing cry echoed through the river valley as it soared over the tree-tops rising through the mists. In the distance, the hawk spied the River Maiden sleeping along the river bank. So-son-do-wah’s heart leapt. “There sleeps my beloved bride,” he said. Then the great bird swooped down, lifted the sleeping maiden upon his broad wings, and flew skyward.

Dawn Maiden awakened, looked about and saw that her lodge was empty. She was filled with anger and that morning painted the eastern sky with fiery red plumes. Soon, So-son-do-wah left the hawk and arrived in the sky-land, bearing his bride in his arms. The River Maiden cast loving glances upon her new husband and that filled his heart with courage. He strode forward to the lodge of the Dawn Maiden to announce his marriage, but she was not glad to see his new bride. A curse fell from her lips. “You shall see your bride in the mornings, but you will never be able to dwell with her,” she said. In an instant the River Maiden rose high into the sky as a bright shining jewel-like star. So-son-do-wah gazed upon her exquisite beauty, but could not follow after her. Often in the dawn’s early hours, one can see the beautiful maiden shining in the eastern sky. She is called Morning Star. So-son-do-wah stands outside the lodge of the Dawn Maiden and gazes up to her with his loving eyes.

During the year of 2010, Venus, the brilliant morning or evening star, is the brightest object in the night sky. It moves into the evening sky in March, low in the west as darkness begins to fall. It will climb into better view through the spring and into summer. It will disappear from view in October as it passes between Earth and the Sun. It will return to view as a “morning star” by early November, and remain there for the rest of the year. If you are up at sunrise, and see it shining in the early morning sky, it is worth waking the children to see it, otherwise, take the children out for an evening sighting during the spring and summer.

The student could write a short sentence in his main lesson book such as “The River Maiden became the Morning Star” with an accompanying illustration.