From Imagination to Form – The Letters A to Z

This is the richly illustrated companion volume to From Moving and Speaking to Writing and Reading. This book includes a colorful image, story suggestions, verses, and tongue twisters for the introduction of each letter. 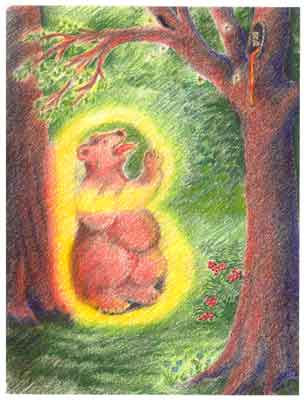 All manner of places

To keep berries in.

Oh our busy B.

Note: the number designations for the stories refer to the numbering of the fairy tales in the Pantheon edition of The Complete Grimms Fairy Tales, with an introduction by Padriac Column and a folkloristic commentary by Joseph Campbell.

We have an image of a honey-loving bear in our book, but the teacher may wish to use the fairy tale 161. Snow White and Rose Red, in which a bear is cared for each evening during the winter and later it is found out that the bear is actually a king’s son. The bear image also is found in the wonderful story of 101. Bearskin, where a soldier, in a pact with the Devil, is forced to wear a bearskin for seven years. He eventually outwits the Devil and is betrothed to lovely maiden who will marry him despite his beastly countenance.

You will have to alter the image somewhat if you use one of these fairy tales. The bear itself can remain as you see it, but instead of the background of the hive full of honey, the bear might stand in front of a house where lives Snow White and Rose Red.

Before teaching the student a tongue twister, always precede this with the telling a short vignette to provide an image and greater context. For example, in our picture of the bear who is after the honey, one could imagine that after he had gathered his fill and is now acting like a glutton; that a great big bumble bee comes along and stings the bear right on his nose. The teacher can play this up a bit with a lot of elaboration telling how the bear climbed the tree and how he got a belly ache because he ate so much; how the bees in the hive were so worried, etc. But the bear wants more and gets his just deserts for the sting smarts and he runs away. Now we have the setting to the tongue twister that we will teach the student that took about three to five minutes to present:

Another useful tongue twisters to practice this week would be:

Each letter of the alphabet is introduced sequentially with illustration and text in a similar format to the sample lesson for Letter B.