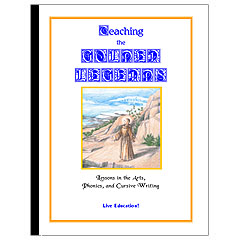 This book is the teaching manual for language arts, presenting cursive writing, and watercolor painting for the second grade year. Using the companion volume A Collection of Golden Legends as the story content, this manual leads the teacher through the daily lessons to be imparted to the students. In the realm of phonics and word families for the development of reading and spelling, this book continues the work that was begun in first grade in the book from Moving and Speaking to Writing and Reading.

The Universal Saint in Every Culture

In the world of academia at the end of the twentieth century, the contemporary view on the question of “universal truths” is that there are no such things. Rather, there are “culturally relative truths”, or “historically relative truths”. And the word ‘truth’ is a misnomer; a better representation of the point of view would be to say that there are culturally relative interpretations or practices. In contemporary thought the point is that whatever is taken to be true is so only within the confines of a given time period or within the practices of a given culture. Consequently, no world-view or tradition would have the final say on any matter. Finding a common ground among the milieu of interpretive plurality is one of the great problems and challenges of our times.

The Waldorf movement stands contrary to the prevailing creed of relativism. For wherever we find the saint, the ‘enlightened’, the virtuous, the ‘perfected one’, the prophet or yogi in any culture, we find there the human being who not only fully embodies the culture or tradition wherein he or she dwells, but also tends to exemplify a quality that transcends the culture into the universally human. This is also the case with any great work of art: the work that a given culture considers as its exemplar, usually rises to the universal human that can be recognized by all cultures.

In the education of the young student, uncertainty and doubt are devastating to a sound and healthy growth. The young child needs to be certain of the parent’s love and care, of a dependable protection, and, in answer to the opening paragraph, that his parents and teachers express a confident belief in the goodness of humanity and of the world—in short, some form of universal truth.

The focus in the lessons ahead, is first to build on those phonics word family skills that were begun in the first year, and second, to develop a better recognition of the difficult spellings and non-phonetic pronunciations encountered in the English language. Consider, for example, the sounds and spellings of the following words:

rough, through, ought, thorough, though

All five words have ‘ough’ in their spellings, but there are four different pronunciations. Surely it is not a very effective way to categorize words by their visual similarities. It is the approach to phonics in this book and From Moving and Speaking to Writing and Reading to categorize the words by how they sound. Look again at the “un” family. Every day the student practices reading: sun, fun, bun, shun, etc. and when he comes to those words that are the anomalies: one, won, ton, done, etc., he can read them with confidence because he knows those words will also say “un” like the others in the family. What is the result? All of the anomaly words become “sight recognized.” We have removed an obstacle on the path to reading and spelling.

If you look in the pronunciation section of many standard dictionaries, you will find that there are approximately nineteen ways to pronounce the vowel sounds of the English language. We say “approximately” because there are a few variations or points of difference among the linguistic scholars who make the distinctions in phonology. (Much of this is due to the variations of pronunciation found among the dialects; a Bostonian will pronounce “car” differently than a Texan.) For the purposes of helping a second year student improve his reading and writing, however, we don’t need to go into the theoretical nit picking.

At this point we are assuming the student has a fairly good grasp of the basic short sounds of the vowels as one would read in the following five words:

But notice the difficulties that arise when we work with the long sounds of the vowels.

There are far more anomalies in the long sounds of the vowels. That is why we begin with the short sounds of the vowels in the first year: there are fewer anomalies. In traditional phonics courses, these anomalies often taught as “the exceptions to the rule”. As the number of “exceptions” pile up with each successive lesson, the student becomes overwhelmed and confused. It is in this troublesome area that we want to provide some help by categorizing the words into the “sound-alike” word families.

First, let’s look at those long vowel sounds that we describe to the young student as the vowels that say their own name. Here are five examples:

Remember that there are about nineteen different vowel sounds. Above are five vowel sounds and last year we dealt with the five short sounds. Can you see some of the potential areas of difficulty from these five examples? Let’s point some out: First, the “a” in day does indeed speak its name aloud, but there are other words where “a” is used in combination with another vowel to make the same sound. For example, it does this in the words “name”, “make”, and “same” from the previous sentence. But consider the words “rain”, “great” and “neighbor”, where one finds the same sound but with different spellings. Second, look at the variations of spellings to make the vowel sound found in “me.” There is the double “e” in “tree”, the “ie” in “field”, the “ey” in “key”, and the “ea” in “sea.” Or, look at the “u” in “use”. There are very few words that actually sound out the “u” sound found in the word “use.” “Uniform” and “unicorn” are two examples, but most often the “u” sound is found in its pure form. Look at all the variations of spellings for pure sound of “u”:

Another distinction to be made is the different vowel sounds associated with the letter “a”. We have already looked at the short sound (as in “cat”) and the “naming sound” (as in “day”) but there is also the open pure sound “ah” and the slight variations on this, found in the words “father” “saw” and “all”. Say these three words slowly in the same order and you will usually notice that the mouth opens wider (as does the sound) for each of these (the word “all” being the widest). But then there is the modification to the sound that comes in when we add the letter “r” as in “car.”

There is a clear and easy way to approach it with “sound alike” word families where the spelling anomalies are included with their “alike sounding” brothers and sisters.

Families belonging to the “AY” Clan