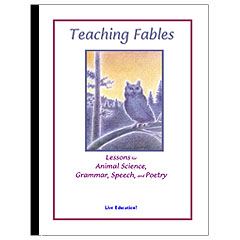 The personified world of the animal fable is appropriate imaginative material for the second grade child. Within the context of presenting a daily story from this wealth of literature, the child is also introduced to animal science, the beginning of grammatical parts of speech and beginning composition skills, all while having fun with animal stories and riddles. This book is coupled to a companion volume of fables called Animal Fables from around the World. The Teaching Fables book also includes a collection of poetry to be used throughout the year in the morning opening activities.

Again this written portion of the morning activities follows the presentation of the fable of the day. In anticipation of the lesson activity it is always best to aim for the sense of an artistic whole in the lesson, so one should find a fable that the written work will in some way echo or reflect. In today’s lesson, we are looking at the many ways that animals make sounds. So an appropriate fable preceding the written work could be The Fox and the Ass, where the ass dons a lion’s skin and proceeds to scare the animals of the forest until his true identity is given away when he tries to roar like a lion, but can only bray like an ass. Another possibility would be the Fox and the Crow, where a clever fox flatters an unseemly crow to think that it has a beautiful voice. When the crow is finally prompted to sing, the meat it has been holding in its beak falls into the fox’s waiting jaws. Of course, the only song that comes forth is a raucous cawing. In both of these fables, there is the indication that an animal is known by its voice as one of its many distinguishing characteristics.

In today’s written work, the student will again compose short sentences that will describe the sounds made by the animals. The teacher will help with the spelling, and will also have the student read aloud his previously written sentences before proceeding. One can continue with color for the two basic kinds of words (nouns and verbs) that have been studied thus far. One might also consider that since we are going to write sentences that characterize an animal’s voice, that today’s lesson could be prefaced with narrative/discussion on this topic:

A human voice can sing, and speak words that convey meaningful thoughts to other human beings, but many of the animal voices are very limited. Some of the animals, if they could talk to us, would have only the same word to say again and again. And it wouldn’t sound like any of our words, it would be a squawk, or a bray, or a bark . Other animals can make several sounds: the dog can whimper, and bark loudly to scare away a robber, or it can whine when it wants the cookie. And there are a few animals that are very clever for they can sound very much like human beings talking. What is the animal of which I’m thinking? Yes, it is the parrot. But it’s clear he doesn’t know what he is saying since he might answer every question the same way. He’s like a recording machine. We say that people are just “parroting” something when they say it without consideration, or do it mindlessly. The point is that you are again comparing human and animal qualities in the realm of the voice.

One may want to describe some of the many qualities in the human being that give rise to expression in the human voice. The voice gives expression to prayer; invocations, praise, and reverence to the Creator; we also express our wonder at the world such the vast rolling sea or the innumerable stars above; the voice shows our sorrows and laments not only in wailing and crying, but also in how we form our words. There is artistic expression in poetry and song, and drama, but there is also oratory and rhetoric where one cultivates a beautiful voice, or a powerful voice, or a convincing tone of voice, and so on. This could be a very long discussion. One could go so far as to recall the ancient bards and magicians, who could call things into existence through the power of the word, and form there consider the implications in the first words of the prologue to the gospel of John.

In the writing portion, then we will ask the student to find the many words that describe the sounds that animals make with their voices. An artistic way to approach this lesson (and if you did it this way, you would probably extend the lesson for two or three days), is to consider animals from several environments, and the sounds that would come from these different environments. In this way, you could combine a natural science lesson with your language work. Here’s how you would do it:

Choose three blank pages in the student’s lesson book. One page will be the forest, another, the desert, and the third the barnyard. We can have some fun with this lesson. The student will draw some trees, bushes and grass for the forest, or a simple fence and barn for the barnyard, etc. The animals are hiding, so we can only hear their voices, we cannot see them, so we will write the sounds they make. Here it would be wise to follow the child’s imagination. Where is the duck hiding? Where is the big cow? You might be surprised at how elaborate the hiding places are, that the child has in mind, though they may not be so explicit in the drawing. After the student has drawn the barnyard, we ask what kind of noises do we hear there? You might have the student dramatize some of these. But the point is that we garner some words that are now written on to the barnyard picture.

You can find other words for the jungle, desert, or seashore. Now you have an illustration page of a barnyard with words of animal voices in various places on the page. On an accompanying blank page, help the student write some of the sentences that make a complete thought using those same words. For example, the student would write:

On the following day, you would then do the same for the jungle or the forest, or the desert, and the student would produce sentences such as:

The monkeys chatter. The lion roars. The coyote howls.

Notice that we are avoiding the past tense at this point, a distinction that will come into play in the Third and Fourth Year curriculum, but one need not be pedantic about this matter. If the student wants to write “The lion roared” then do help him spell it. The point is that a formal presentation of the tenses comes later.