A Collection of Golden Legends

This is the companion volume for teaching language arts in the book Teaching the Golden Legends, filled with original retelling of saints legends from various cultures.

These stories, with the one exception of the French legend of Michael, are original retellings of the lives of various saints who for the most part lived throughout the first millennium of the Common Era. In writing these stories, I have drawn upon the traditional source materials. Thus recognition is owed to the Venerable Bede for his Life of Saint Cuthbert that we have in translation thanks to J.F. Webb; to Brother Ugolino di Monte Santa Maria for the Little Flowers of Saint Francis given to us in translation by Raphael Brown; to Jacobus de Voragine for the classic collection of saint’s legends known collectively as The Golden Legend and translated by Christopher Stace; to Martin Buber for his Tales of the Hasidic Masters; to the brief indications given in Butler’s Lives of the Saints; to Idries Shah for his collection known as Tales of the Dervishes; and finally to translations from the original Latin by Helen Waddell on Celtic Saints and Desert Fathers that can be found in her collection known as Beasts and Saints.

Rumi and the Caged Bird

Once upon a time the great poet and saint Rumi visited a small village as he passed through on his way to the great city of Baghdad. All of people gathered where the well stood in the center square of the town to hear the saint recite his poetry. So beautiful were the saint’s words as he spoke of his love for God, that many were moved to tears. After the saint had finished speaking, several came forward and offered him refreshment which he gratefully received. As the villagers began to disperse, returning to their daily tasks, a merchant approached the saint. “Master Rumi,” he said, “I wish to ask a favor of you. My favorite possession is my bird. But her wings and head droop every day, and no longer is my house filled with her sweet song. I have brought medicine and healthy food, yet nothing seems to banish its illness. Will you come to my house and see this bird? The saint agreed.

Rumi saw into the man’s heart. It was hardened all around like stone, for the merchant was desirous only of his own gain. “This man’s heart is imprisoned in a cage,” he thought to himself. But he agreed to the request, and followed the merchant to his house, which was easy enough to spot from afar since it was the largest and most lavish house in the village. The merchant led the saint into a large room and there by the window stood a large cage with a lovely plumed bird inside. True to the merchant’s words the bird appeared to possess little vitality as though ill. Then Rumi began to sing a song and as his soothing words fell upon the ears of the bird, first it began to twitter then at last began to join its voice to the melody of the saint. Then it let off abruptly and returned to its former state.

Rumi said to the merchant, “the bird is unhappy because it longs for its freedom.” To which the merchant replied, “I will give the bird anything that it asks for that is within my power, but I cannot grant its freedom. I am traveling tomorrow for India and will return in forty days. Ask the bird if there is something that I can bring to it from its homeland.”

The saint whispered quietly to the bird who immediately began to flap its wings and burst into a short song. The merchant was overjoyed to see his favorite possession restored to health. Rumi then told the merchant that the bird would be fully restored if he were to do the following: While he was in India, he should visit the nearby forest where birds similar to his own live, and announce to them that one of their sisters is captive within his home. The merchant was somewhat puzzled with this instruction, but delighted that his bird again greeted him with song, agreed to do as the saint requested. Rumi then continued on his way.

Several weeks later, when the merchant was in India, and feeling a sudden longing for home and his pet, remembered the saint’s instructions and hurried out to the nearby forest. There, high among the boughs and filling the canopy of trees with their songs were the sister birds. “O that I had a dozen of these wonderful creatures filling my house with their melodies,” he thought, and then in a loud voice he announced, “one of your sisters lives captive in a cage at my home.” No sooner had the merchant spoken these words, then one of the wild birds fell senseless to the ground from one of the boughs of the trees. For a moment the merchant was shaken by the sight of the bird’s sudden death, but then hurried back to his business at the city where he was staying.

When he returned home to his village and entered his house, he was puzzled to see that illness had once again returned to his precious bird. “What is this?”, he exclaimed, “I have followed the saint’s instructions.” He then approached the cage and speaking softly to the bird told it of the misfortune that he had encountered in the forest. “I have sad news for you my friend, for when I told the others of your captivity, one of your sisters fell immediately to the ground dead.” 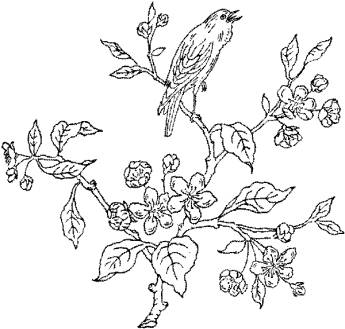 As soon as these words were spoken, the bird collapsed and fell to the bottom of the cage. The merchant was aghast. “What misfortune is this! Now my bird is dead too!” he exclaimed. Sorrowfully, he plucked the dead bird from the cage and placed it by the window sill. At once, the bird revived, flew out the window and perched on a branch far out of reach of the merchant. “What is the meaning of this?” he cried. Then, through the power bestowed by the saint, either upon the heart of the man or upon the tongue of the bird, it began to speak and the merchant understood its language. “You brought not sad news to me, but the way to my freedom,” said the bird. “For my forest sister showed by her action what I had to do in order to free myself. O man, may your heart be set free to fly from the cage of your greed before it perishes in its captivity.”

Then the bird flew away, free at last.