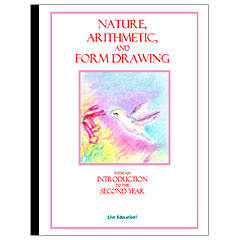 Nature, Arithmetic,and Form Drawing with an Introduction to the Second Year

This book not only continues the study of nature science that was begun in the book on Native American legends, but introduces the math and geometry of the second grade year. Following the introduction to the four processes in the first grade, in the second-year, place value, column addition, and column subtraction are introduced, while the simple ribbon forms of first-grade form drawing are now developed into right and left and above and below symmetry drawings.

The three basic formations of clouds, the cirrus, cumulus, and stratus, are analogous to flower, leaves and the root system of a plant. The great cauliflower formations (the cumulus clouds) that delight us when we see them are like a profusion of leaf upon leaf. In the upper reaches of the atmosphere, the delicate cirrus swirl about growing out of the tops of these puffy cumulus clouds. They are so high that they often form ice crystals and we see colors refracted among them. They are the flowers of the clouds. The stratus is flat and broad, hugging the earth, and when it becomes laden with moisture, it is the nimbus or rain cloud.

Tell a story about a conversation between the sister flowers and their brothers the clouds. One of the elements in the story is that they notice similarities between themselves. The three sister flowers compare their leafing and notice the brothers in the sky. “But we also have blossoms to reveal” they say to the clouds. But then one day a great halo (or a sundog) appears among the cirrus clouds forming many rainbow colors. Brother cloud thanks the sister flowers for showing him their colors for now he too has found out how to make colors also.

Another time the flowers are withering in the heat, but brother cloud comes along in time to bring some rain. The flowers then send their fragrance up to him as though to say thank you. But the fragrance is so wonderful, that brother cloud parts that it may travel up to the stars.

These forms are reminiscent of three of the four elements: air, fire and earth. The nature theme on the formation of clouds can introduce the first form that reminds us of cumulus clouds. Aim for symmetry of width and height. The illustration shows only one repetition of the form, but it should be carried out on the page to create two lines of three or four repeating shapes

The next form reminds us of flames of fire. The teacher could introduce this form with descriptions of fire in nature such as from lightning, volcanoes and spontaneous combustion. Again, draw two or three lines of the form on a single page. It too can be colored. Notice that the yellow shapes between the orange flames also create a repeating shape.

The last form reminds us of strata of rock in mesa-like shapes, so an appropriate nature description might be on erosion and sediments: how layers of rock and mud are formed over time.

Although only one repeating shape is shown, the student’s page should be filled with two or three lines of several repeating forms.