Stories from the Cradle of Civilization: Sumer and Akkad 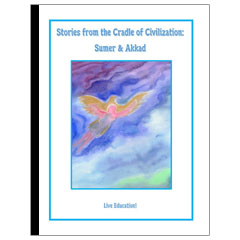 This book covers other inhabitants of the Fertile Crescent during the rise of Hebrew culture. Here one will discover figures of other cultures similar to Noah and Job and other prominent figures of the Bible. There are many opportunities for watercolor painting activities in this study of comparative cultures.

Marduk, Slayer of the Dragon

As a show of appreciation, all of the gods and goddesses set to work creating a splendid palace for Marduk, the elected prince of heaven. When this work was completed they stood before him and spoke as one heavenly chorus, “Go, Prince Marduk, slay the dragon Tiamat who would destroy us and all good things that we have created. May the winds scatter all of her blood to the unknown quarters of the universe!” Marduk then took to his right arm the bow, and having fixed the string, hung the quivers at his side. Then he seized flashing lightning before him, and created a net large and strong enough to ensnare the Dragon. He filled his body with Divine Fire. He let loose the winds and bade them to stand beside him. The four winds would assist him in stretching the net to encircle the Dragon. Then he gathered behind him one of his most formidable weapons, the hurricane. His chariot, made of searing tempestuous winds and drawn by four swift and violent steeds fearless in battle, was brought to him. Grasping the thunderbolt in hand, he arrayed himself with these terrors and went forth to battle Tiamat the Wrathful.

As son of Ea, the intelligence of the universe, Marduk could divine the thoughts of other beings. When he approached the watery and abysmal womb where the Dragon Tiamat slumbered, his power was such that he could enter right into the center and most secret part of her abode. There he found Kingu, her husband and general of the demonic army coiled within. Marduk could read Kingu’s plans and strategies immediately.

Kingu leapt swiftly out of that place, for seeing Marduk arrayed with the four winds, armed with bolts of lightning and his body filled with fire, the Demon general began to shake with terror. His legs became weak and his mind addled. He stumbled and staggered away toward the demon legions ready to issue the order of attack but his voice could not muster a sound as though all of his breath had been swallowed into the rousing winds surrounding Marduk. Without a voice he was not able to use the Tablets of Destinies as a weapon against his adversary. The demon army recoiled with fear at the sight of the mighty Marduk; suddenly they became helpless before him—their claws and nails began to curl back upon themselves, and they clenched and chattered their teeth so hard that the sharp fangs began to crack and fall from their mouths like a rain of hailstones. 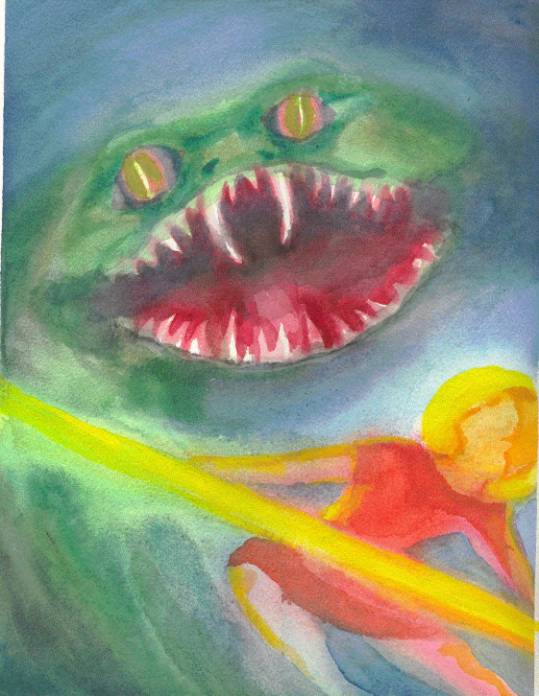 This is the most difficult painting among all are presented in this book, so one might pass over it in favor of the easier paintings in the other lessons. It is easiest to begin with semi-dry paper (rather than fully wet) and paint the eyes, teeth and mouth of the monster. Use red to paint for the inside of the mouth and create a saw-tooth form above and below with the red paint—this allows the white negative space to become teeth. Notice a white stripe is left for the center of the eyes. These were painted first in red, and after they dried, yellow-green was glazed over them.

Now that the eyes and mouth are in place, one can use the large watercolor brush to brush water over the rest of the paper so that these areas can be painted with a wet-on-wet method. Deep indigo blues were used to surround the dragon figure, but you can mix some Prussian blue with a bit of black. The figure of Marduk is painted in red, the diagonal of the lightning spear is lifted out, leaving white paper showing, and as this dries, yellow is painted in. When the red body of Marduk is almost dry one can carefully bring in the blue background around his figure. The indigo blue mixed with some yellow makes the deep green of the dragon’s body and this color is brought around the eyes and mouth.