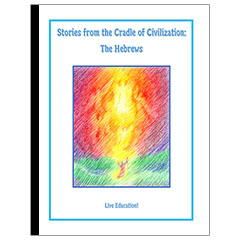 Stories from the Cradle of Civilization: The Hebrews

Every grade in the Waldorf school curriculum is inspired by a literary/historical/cultural theme. Saints and fables are the stories of the second grade, fairy tales are found in the first grade, Norse myths and Beowulf will be found in the fourth grade. Here in the third grade, the stories and myths of the cultures arising in the Fertile Crescent are the theme. An entire corpus of legendary material from Hebrew sources grew up alongside the writings that were eventually canonized as “Scripture.” In contrast to the scriptural writings, the legendary material portrays a loving and compassionate deity rather than a jealous and vindictive deity. This book also has a section that constitutes the introduction to the third-grade year helping the teacher lay out the block rotation for the year as well as organize each day.

Painting the Six Days of Creation from Genesis

When presenting the lessons, the teacher can begin by describing the phenomena in the existing world that correspond to the creation. For example, on the third day, the teacher would begin the lesson by speaking about the plant kingdom. She would call to mind many kinds of growing things describing the shape and where it is found, from mushrooms and fungus, algae and lichen, to conifers, leafing trees and flowering plants. She could for example describe the environments where one finds the mushroom and contrast it to the dry region where one finds the cactus. Other plants could follow in this portrayal of polarity. Tall and short; in the open or hidden (like violets among the moss); in the mountains or on the plains; thorny or leafy; etc.

A mood of gratitude can be engendered by surveying the many gifts given to the human being by the plant world. Obviously, the air we breathe is vital, but we are also given our daily sustenance from the humble grasses, the grains. The teacher could describe how throughout the world different peoples are nourished daily by a dominant grain that is cultivated in their land: rice in the East, wheat and corn in the West, rye and millet to the north, etc. The many fruiting trees should be considered from the date to the apple: then there are the vines with their foods, and all the vegetables—some we eat of the root, others we eat of the leaf or flower. Finally, there is the wood given as a sacrifice by the tree that we may have a dwelling in which to live. Some plants also provide us with healing when we are ill. Rope, fibers, cloth such as cotton and linen are a gift from the plants, and even this paper that we shall paint upon —and the handle of this brush as well. Similarly, on other days, the teacher will give an introduction about the wonders of the heavens — such as the nurturing power of the sun and jeweled night sky that guided many travelers throughout the ages. She can describe the animal kingdom in the same manner as the plant kingdom, in which polarities are brought out: animals large and small; in the wet jungle or in the desert; creatures of the air and of the sea; those with hooves and those with paws; etc. Again, the animal kingdom provides many gifts to humankind from the alert watching and companionship of a pet, to locomotion by horse. The ox pulls the plow or draws the buckets from the well by wheel. Of course there are the milk, yogurt and cheeses given by the goat and cow. The Plains Indians were completely dependent upon the buffalo for their clothing, food, and shelter. When describing the wonders of the human form, the teacher can draw attention to all of the things that the wonderful hand can do: paint, build, play an instrument, design, plant grain, forge tools, communicate, etc. Or choose a sense such as hearing or seeing and describe all of the things that a human being can hear, for example. One should include the wonder of language in all its forms, not only words we speak, but mathematics, music, signs, symbols, and art forms —all unique human languages.

In painting these six days of creation, we are in essence giving an introductory picture of the entirety of the natural science curriculum in the years ahead. In the following two years, the student will have an in-depth study of the whole plant world, and an overview of all of the animals of the earth. Similarly, in the upper grades, the meteorology of the atmosphere, the physics of light, sound and heat, and the astronomy of the heavens will be taken up as well as the physiology and anatomy of the human form. 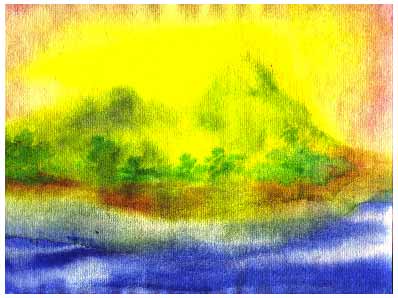 To paint the third day of creation, begin by recapitulating the second day starting with the yellow in the upper portion and then building up the blue sea in the lower portion, but now, the blue and the yellow will touch at the middle creating the green earth and its vegetation. After some of the green is formed between the yellow above and the blue below, a bit of red can enter into the green which will then form a reddish brown as the trunk and branches of trees. Use the brush turned on edge to form the trunks. Strokes of green can form the grasses. The forms should look somewhat vague as though seen through a mist. Thus the colors should not be too strong.