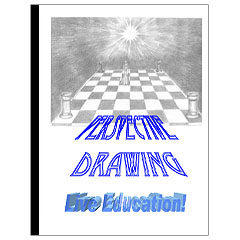 Exact geometrical perspective drawing, using T-square and straight edge, was developed in the early Renaissance. Perspective geometry creates the illusion of seeing into three-dimensional space on the two-dimensional surface plane of the picture. The student will learn to construct architectural interiors and exteriors as well as landscapes. Embedded within this study are main lesson contents on Renaissance themes.

What we have just created through the division of a given space, is the grid. We have made a vertical grid, but we can also make a horizontal grid for ceilings and floors. The grid is fundamental in creating an accurate representation of three-dimensional space and for the accurate placement of figures in that created space. Consider the overlapping of objects that were studied in lesson 2. There it was pointed out that the two figures standing alongside Otto III were occupying the same space. You can see this by examining the placement of their feet. A true perspective space was not created for the rear figure to stand in, so his feet are awkwardly entangled with those of the front figure. If the artist had been able to project a grid into his painting, much like a chessboard, then the rear figure could be accurately placed on a different tile than the front figure.

This illustration shows the meticulous grid construction used by Leonardo in his plan for the painting known as the Adoration of the Magi. The grid lines are not present in the painting; the artist has used it in this sketch, not only to form the architecture, but especially to place the figures in correct proportions of size depending how near or far they stand in the drawing. The grid also gives accurate placement of each figure or object so that each occupies its own space. It was common practice for the Renaissance artist to lay out the composition with grid lines such as these. In many cases, the grid was drawn right onto the canvas or applied to the wall where a fresco was to be painted. As the paint was applied, the grid lines would then be covered over.

Only the under-painting of projected work was completed by the Leonardo, but it is masterful in its execution and enigmatic in its symbolic content In the finished under-painting, Leonardo has made some changes to the original sketch. The three wise men form a beautifully proportioned compositional triangle with the mother and child in the foreground of the painting filling the open space of the grid in the above schematic. The scene is tender, reverent and still. Figures crowd in above the head of the mother with cherub-like expressions. Two trees grow from a hillock behind the group as though reminiscent of the Tree of Life and the Tree of Knowledge. The calm center is surrounded with emotion and turmoil. In the distance, one can see the perspective lines disappearing into the vanishing point beside a rearing horse. The background of the painting is like a visual narrative to the background of the gospel depiction: the slaying of the innocents by Herod.

The grid is easily constructed. Begin with the bottom baseline horizontal, and measure eight equal intervals of one inch apiece. Connect all of these to the vanishing point at the upper center of the drawing. Now draw the second horizontal. You will have to place it at a distance from the first horizontal that looks like a row of eight squares (not rectangles) across. Try to judge this accurately. Does the row look like square tiles or rectangular tiles. Make the necessary adjustment.

Now you can see how a diagonal through the corner square on the left can be extended across to find every other horizontal in the series. You can imagine this grid to be similar to the six division from the previous lesson, but in this case it is an eight division constructed horizontally. When completed, one will have an eight by eight, sixty-four square board. This, then, can be constructed again for the sake of drawing the surreal chessboard in the illustration. The light source is also the location of the vanishing point.