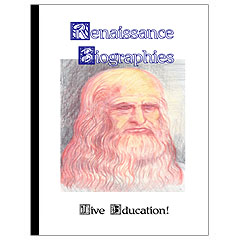 One lives through the exciting times of the European Renaissance through the lives of three principal biographies. Art history of the Renaissance is introduced in this study and one of the important activities of this book is devoted to learning portraiture.

It is well-known that Leonardo liked to find actual models for his drawings and paintings. In this regard, there is an interesting anecdotal tale that has the ring of romantic fiction, but one can imagine that it could have happened. It makes a strong impression on young people so it is valuable to include. The story goes that when Leonardo was a young man he walked the streets of Florence looking for a face he could use as a model for a portrait of Christ. He spent days until he found a young man who seemed to have the nobility, strength, and depth of character Leonardo was seeking. When Leonardo asked him, the young man agreed to be a model. Many years later, Leonardo was looking for a subject who would pose for a drawing he wished to make of Judas Iscariot, the disciple who betrayed Christ following the Last Supper. Again he spent days walking the streets until he found someone suitable. The man was tired and gaunt, as if he carried a great burden of suffering. When Leonardo approached him and asked him if he would pose as Judas for him, tears came to the man’s eyes. Leonardo asked him if he had offended him and the man shook his head. Sorrowfully, he explained that he was the very same man Leonardo had asked years before to pose as Christ.

One of the contradictions in Leonardo’s nature was the fact that he had so gentle a disposition, even to the point of becoming a vegetarian so as not to inflict harm on animals, and yet at the same time he designed a number of horrific military machines. He was well-known as a military engineer and at one time was employed for this very purpose in Milan. Some have said that Leonardo’s writings suggest that he hoped the horror of war would eventually cause mankind to give up the barbaric practice. But he also mistrusted the cruelty in human nature. Among his drawings for weaponry was a kind of armored battle tank, anticipating this weapon by four centuries. He also studied the flight of birds and was interested in developing a flying machine. He apparently made a rudimentary device which included propeller and wings but it would not have been able to fly.

Leonardo was innovative and inventive in everything to which he turned his hand. He is credited with drawing the first true landscape in art. He is famous for his landscapes, for which he often employed a misty style called sfumato, meaning “vaporous.” It is said that Leonardo sometimes applied as many as a hundred layers of almost transparent oils to achieve the desired misty effect, suggesting an ethereal and mysterious world out of which his figures emerge.

It was this style that enabled Leonardo to create an almost dreamlike quality that hinted of a deeper hidden reality which would not have been achieved if one painted only in a bold, direct style, making everything to appear in the vivid light of day. Despite his use of the sfumato technique, Leonardo represented nature with almost scientific precision. In his landscapes and backgrounds Leonardo executed beautiful rocks, trees, flowers and vegetation in vivid detail.

Leonardo’s visual perception was unnaturally keen and his eyesight has been described as superhuman in its ability to see rapid movements that escaped then attention of others. For instance, he often drew water in motion. He was able to observe the characteristic flow of water moving rapidly and visually isolate movements which were not confirmed until centuries later when through photography and video the accuracy of Leonardo’s drawings were corroborated.

The following anecdote about Leonardo illustrates the respect and renown he enjoyed among his countrymen. The story goes that Leonardo was traveling in Italy when he came to a small, walled town late at night. Perched on the wall above, a guard asked Leonardo what he wanted. The artist explained that he was Leonardo da Vinci and wished to sleep the night in the town on his way to another city. The guard laughed aloud and refused, not believing he was who he claimed to be. At this, Leonardo bent over in the dirt and with his left hand took up a sharp stone and began to draw something on the ground. In a matter of moments he stood up, having drawn a virtually perfect circle several yards in diameter, without use of any instrument to aid him in calculating the arc of the circumference, and without having to make any erasures. The guard, realizing the virtuosity of the stranger, determined it could only have been Leonardo and immediately opened the gate to let him in.

1. Relate the anecdote of Leonardo’s search for a model for the face of Christ and that of Judas. This can lead to a discussion or a writing assignment. During the Renaissance, many individuals believed that human beings had the power to create their individual destiny. It has also long been a popular notion that one’s thoughts and experiences inscribe themselves on the features of one’s face and countenance. In this regard there is an anecdote told of Abraham Lincoln when he was President. He once refused to see a man who had been waiting for days to have an interview with him. When asked by an aide why Lincoln refused to see the man when he ordinarily listened to private citizens, Lincoln replied that he could tell by the man’s features that it would only be a waste of time. The aide was shocked that Lincoln would judge someone by their external features. Lincoln said that to do so to a young person would indeed be an injustice, but that after the age of forty an individual’s dominant thoughts and feelings leave an impression on his or her features.

Ask the students what sort of emotions or thoughts would be reflected in features one might characterize as unpleasant. What kind of thoughts and feelings would contribute to beautiful, handsome features?

2. Tell the story of Leonardo arriving at the gates of a town at night and drawing a perfect circle in the earth as a means of proving he was, in fact, Leonardo. Have the students draw freehand circles on pieces of paper. Then ask them to use a compass to draw a circle to see how close to perfection their freehand circles have come.

3. Have the students observe water as it is moving. Ask them to try to draw the flow of the water, as Leonardo often did.