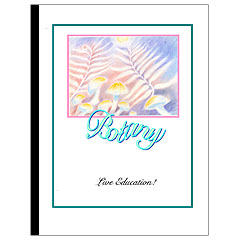 This teacher’s manual constitutes the life science study in the fifth grade providing 6 to 8 weeks of lessons and activities with an overview of the whole of the plant kingdom. One climbs the ladder of the plant kingdom from fungi, lichen, and mosses, up to the conifers, and finally to the monocotyledons such as the grasses and lilies, arriving at the most developed and complex flowering plants-the dicotyledons.

With algae, we leap into the realm of chlorophyll producing plants that enters into the reciprocal relationship of life with the human being. For green plants– algae being the most rudimentary form– produce the oxygen that sustains the human being and the animal kingdom. The mushrooms and fungi do not do this. The reciprocal relationship is found in the expelled carbon dioxide from the breath of human being and animals; this exhaled gas sustains the green plant. Though algae helps to supply the air and water with oxygen, when it grows very thick on the surface of a pond, it actually serves to cut off the oxygen to the water and kill the life below. Such thick algal blooms are often stimulated by the intrusion of sewage and fertilizer run off —human pollution.

Most algae is found in water such as the ocean, ponds, lakes, and marshy areas, though one can usually find it growing on the surface of moist soil. The tiniest of algae are so small that they can be seen only with a microscope. On the other hand, kelp, which is called a brown algae, can be found in the ocean in lengths up to 200 feet. The slippery coating on rocks along streams and rivers or the slimy coating on wet soil is usually an algae. One thing that is interesting about lower plants such as algae or bacteria, is that they often reside on the borderline between plant and animal. Some zoologists claim that one variety of the single celled algae is actually an animal. In both the animal kingdom and the plant kingdom, the simplest organisms tend to live on this borderland between the two. When we study the conifers, we will see a plant that is more intimately connected to the mineral kingdom than many of the other plants. The connection between plant and animal is remarkably evident when one explores the tidepools along the seashore. There one will find forms of animals that resemble plants, and as we have just pointed out, there one will also find microscopic plants that seem to belong to the animal kingdom. Of course, we need to keep in mind that the algae belong to the oldest living things on earth as do the rudimentary animal forms.

If we keep in mind the parts of the fully developed plant with its blossom, roots, fruit, etc. then it becomes evident, that the algae belong to the middle part of the plant. Algae are unrooted floating leaves that will never blossom. Though large pieces of kelp and oarweed appear to anchor themselves to rock, if one looks closely he will not find a true root system, but a structure that is like the leaf part of the plant mimicking a root. Botanist call this a “holdfast.” The same is true of what looks like a stalk. These are usually stringy part of leaves that are stretched out and function with the support of the water’s buoyancy like a stalk. If we were to take a piece of beeswax, and begin with a simple leaf shape, then mold the wax into various shapes by stretching it out or clumping it; thickening and making the form bulbous; rounding it and flattening it, we could make all of the many forms of seaweed that we find along the shores and out at sea. For every form of seaweed is nothing more than a stretched, flattened, or bulbous leaf.

The many shapes created by the transformed leaf motif tend to be rounded, limp, and yielding as they sway with the motion of the waves. On land, the light of the sun plays directly on the surface of many of the plants which helps to give definition and articulation to their forms. Think for example of the dandelion and the intricate clefts and serrations written into the shape of its leaves. Compare this to the indefinite and rounded forms found in the plants of water and we can see that the form-giving force of the sun has been mediated by the refractive and reflective qualities of water. The deeper regions of the water let only some of the light of the upper world through. Notice the shape of the red seaweed on the following page. Doesn’t it remind you of a rounded and flattened silhouette of a tree? Here we see again a kind of mirroring or mimicking of the land plants —or the shapes of land plants that have been modified by a watery existence. Along the California coast, when the tide is out, one can see exposed rocks that are covered over with a kind of seaweed called sea palms that sway with each undulation of the waves. The overall impression is of a tropical island seen in the distance where groves of palm trees are gathered on the shore. Some varieties of red seaweed have leaves that resemble those found on deciduous trees. When we see the bladders formed on many varieties of seaweed we get the impression of a fruit. However, these bladders are not fruit, but again, are a transformed leaf that has been rounded and puffed out. When we look at the underwater plant world, we gain the impression of the meadows and forests of the upper world but they have the quality of a dreamy phantom-like existence. Our dreams tend to evaporate as we awaken in the morning light of day, so too do these watery dream-like plants dry and shrivel to something far less than their original form when taken from their dreamy watery realm and are brought into the light and warmth of the upper world. 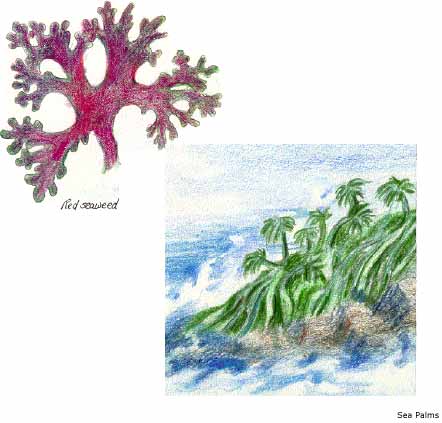 Main Lesson Activity
Following the teacher’s presentation, have the student write a summarized account of algae and seaweed into his lesson book, (similar to Writing/Dictation exercise no. 4) placing the greater emphasis on the seaweed. On the accompanying page, the student can draw an illustration of some forms of seaweed such as kelp or bladder wrack, or the sample of red seaweed seen above.

Main Lesson Activity
There are beds of kelp that float like green islands upon the sea along the California coast. A tiny ecosystem is formed there, and the principle inhabitant is the sea otter. He feeds on the shellfish that adhere to the kelp and the creature often wraps itself in the kelp to make a floating bed. The kelp forest helps to hide the otter from predators like the shark. Find out more information on this topic of the creatures of the kelp forest especially the life of the otter. The student can write a short story on the day in the life of Willy Otter.

Main Lesson Activity
Seaweed and products made from seaweed provide some of the food used by the human being as well as other useful products. Some people use powdered kelp on their sandwiches and cooked food as a salt substitute that contains many minerals. The Japanese wrap sushi in seaweed. An important gelling agent known as algin is extracted from seaweed, and has many uses such as thickening dyes, glazing paper, waterproofing, a food stabilizer and a suspending agent for medicines, paints and cosmetics. Use part of a lesson to gather as many products together in the household that have seaweed extracts as their basis. Have sushi for dinner tonight.

Main Lesson Activity
As was suggested in the description on algae and seaweed, procure a large hunk of plastilina for modeling (or beeswax if you have a lot of it) and create a simple leaf shape. Set this aside and begin again making the same leaf shape only this time add more material and elongate and flatten it to make strips of seaweed. Experiment to create as many of the shapes of seaweed as you can. You will probably have to refer to pictures for the forms. Each time, begin from the basic leaf shape and then thicken or flatten it, contract or expand the form to make the many shapes of seaweed.

As an alternative to this exercise, cut out shapes of construction paper to make various forms of the seaweed and algae. The cutout shapes can be then glued in place in the main lesson book.

Algae grows only in the water; it will collapse when taken into the air. It is commonly found in the sea where it is known as seaweed. The algae takes many forms, some look like moss, yet other resemble lettuce, shrubs, and even palm trees. The algae are nearly all leaf, even their stalks are stretched out leaf forms. They make no flowers because they have no roots. The forms of the higher plants are created by the interplay of light and the earth. Algae are formed by the reflective glowing qualities of water; their undefined forms reveal that they are watery phantoms of the higher plants.