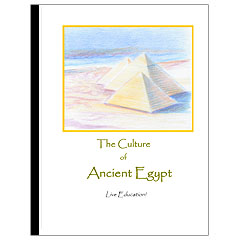 The Culture of Ancient Egypt

This study continues the story of the rise of civilization along the Nile. The student learns of the overarching myth of this culture, that of Osiris and Isis, and is introduced to the Egyptian pantheon. The construction of the pyramids, hieroglyphic writing, mummification and many other aspects of Egyptian civilization are studied through learning activities.

The Birth of Isis and Osiris

Nut the sky goddess loved Geb the Earth and wanted nothing more than to be embraced by him. This made Ra very jealous to know that Nut loved someone more than him. He told Shu the god of Air to come between Nut and Geb in order to keep them apart. This saddened Nut, for she could only touch her beloved Geb with her toes on the eastern horizon and with the tips of her fingers in the West where the sun set each day. She still gazed lovingly at Geb but could not hold him.

Soon after, ibis-headed Thoth, the wisest of the gods, told Ra a prophecy. Thoth was learned in all things, could read the script of the stars and could search the living book of nature for hidden truths. “Great Ra,” said Thoth, “Lord of all Creation, I tell you now a prophecy. Nut shall soon give birth to children of Geb. One of these shall grow to become the ruler of Egypt in your stead.”

These words of Thoth greatly disturbed Ra for he knew that Thoth always spoke truth. Nonetheless, he determined to find a way to prevent Thoth’s prophecy from coming true. He thought to himself, “I am Ra the namer of all things. I have measured out the hours of the day, the days of the year and the great cycles of time. I have seen to it that there are 360 days of the year. I now lay this curse upon Nut: She may not give birth during any hour of any day of this year or of any year to come.” Ra was satisfied that he had prevented Nut from ever giving birth, for nothing or no one could go against his word.

Nut was deeply sorrowful at Ra’s curse, and mourned that she might not give birth to her children. All the gods grieved with her, but Thoth especially. He knew it had been his prophecy that had alerted Ra and led him to curse Nut. The clever god of wisdom came up with a scheme of his own.

He went to the moon god Khons and invited him to a game of chess. Khons readily agreed for he loved to try his hand at games. “The loser shall forfeit something to the winner,” Thoth said. “Let it be so,” Khons agreed. And so they began playing that very night. Thoth won easily for he was the cleverest of the gods. “What shall I pay you?” Khons asked.

“Give me a little of your moonlight,” Thoth said. Khons quickly agreed, for he had plenty of moonlight to spare. No sooner had they finished one game then they began another. Khons was determined to win. Yet the moon god was no match for the wise Thoth. Again Thoth won and again he asked Khons for a little moonlight in payment. It went this way for the rest of the night and by dawn Khons had lost so much moonlight that he had to be careful and not squander what remained. From then on the light of the moon diminished each night for half the month and slowly grew back to its full brightness as Khons carefully rationed his supply. The moon is at the fullness of its splendor only one night each month.

With the moonlight Khons had given him in payment for his victories, Thoth had enough light to make five more days. He added these to the end of the old year and before the beginning of the New Year so that they were not part of any year. Nut was able to give birth to her five children during these five days which were not a part of any year cursed by Ra.

Ra was furious when he learned of the birth of Nut’s children, but it was too late for him to reverse what had happened. Nevertheless, he did claim the five new days of the year as his own and from that time on there are 365 days in each year. Eventually Ra forgot his anger and accepted the new gods in the councils of heaven. The Egyptian name for a god was Neter and heaven was the Neter World.

As for Nut, she rejoiced at the birth of her children. Osiris was the oldest, born on the first day. Haroeris was born on the second day, and Set on the third. On the fourth and fifth days she gave birth to her two daughters; first Isis, then Nephthys.

A most auspicious event took place at the time of Osiris’ birth. A voice was heard–whose it was no one could say–declaring, “Behold, the Lord of All is now born.” Over time this proved to be true, for Osiris became the Lord of the Living and the Dead, honored on earth and in the heaven worlds. To ensure that no harm would come to her eldest son, Nut gave him into the care of the all wise Thoth to be brought up in wisdom and understanding.

Tell the story of the birth of Isis and Osiris. Relate how Thoth challenged Khons to a chess match in order to capture moonlight from him to make five extra days. Use water color paints to paint a scene with the moon against a dark blue sky. Paint the moon at different phases.