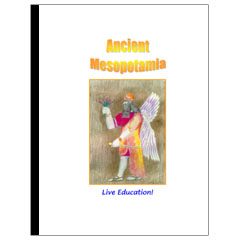 The cultures of the Fertile Crescent, such as Sumer and Babylonia, and of Egypt of the Nile arose simultaneously. In this study the student learns the oldest story of mankind, the great epic of Gilgamesh. However, important cultural developments occurred at this stage of humanity’s growth such as the growing of surplus crops, the domestication of animals, great architectural feats, cuneiform writing, and the codification of law that are also introduced with activities. 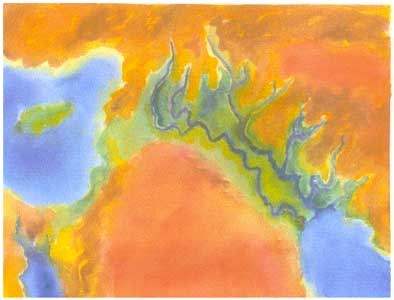 We described in the book on Ancient Persia those reasons why it is best to leave mapmaking for the end of the fifth year, and remain in the realm of an imaginative picture of geography for the early part of the year. In such a case, an imaginative picture of a huge crescent shape of fertile land where early civilizations arose can appeal to the student of this age far more so than a map laid out on the grid of latitude and longitude —something of an abstraction that human ingenuity has imposed upon the earth.

In the painting above, one can see the Tigris and Euphrates Rivers flowing southeast into the Persian Gulf. A portion of the Mediterranean Sea is seen in the west as well as part of the Red Sea (lower left-hand corner). One can follow the strip of green that surrounds the two rivers as it curves in a horseshoe shape along the north (Armenia) and then descends southward along the Mediterranean through Syria and Palestine. If we were to cross the Red Sea, westward, we would enter into the Nile River Valley civilizations. The Fertile Crescent is often referred to as the Cradle of Civilization and has been a pivotal point around which revolves many significant events of world history that continue into our contemporary world. This is the birthplace of the Occidental and Near Eastern world’s religions: Judaism, Christianity, and Islam, as well as the nearby Persian Zorastrianism. The Fertile Crescent has a long history as a central trade route. Historically, this was the meeting place of the Western and Eastern worlds. The teacher should emphasize to the student the importance of this region in world history as a presentation and describe in detail the terrain of these lands. For example, the land is extremely marshy where the two rivers flow into the Persian Gulf. There, people build large cathedral ceiling houses and boats out of tule reeds. Directly to the east of the two rivers are the hostile Zagros Mountains that were studied as part of the block on Ancient Persia. The “crescent” surrounds the barren waste of the great Arabian Desert. What would one see in the Arabian Desert? What kind of temperatures would one experience? How could one get across such a waterless wasteland? Etc.

The easiest way to begin the painting is to form the watery shapes of the Mediterranean, the Red Sea, and the Persian Gulf in blue. Then form all of the landmasses—the Arabian Desert, the Zagros Mountains etc. in yellow. In short, the entire page will be filled with either blue for the seas or yellow for land. Continue to shape these by lifting out paint with a dry brush where needed and then allow the painting nearly to dry before continuing. Once it is almost dry, use a detail brush to draw the course of the rivers and their tributaries in blue. Then lightly glaze some blue over the yellow to form the green Fertile Crescent. Put down one layer and allow it to dry before deepening it with more blue. You may also use a pre-mixed green. You may wish to have the desert remain yellow, or you can blend a light glaze of red over it to form an orange. For the mountainous regions in the north, one can mix a bit of red with a light touch of blue to form a pale violet. This is then glazed over the yellow and forms a shadowy brownish neutral color. But notice that in some places, the yellow is allowed to show through as a highlight.

The teacher may also wish to have the student draw a similar map in the main lesson book in color pencil along with a few words of description on the geography of the Tigris and Euphrates River Valleys.