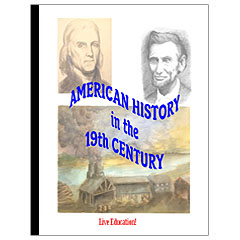 American History in the 19th Century

This book on American history follows chronologically its companion volume Early American History. It begins with the Louisiana Purchase and the Lewis and Clark expedition, and investigates changes in the character and ideals of America as it entered into the Industrial Age, Annexations, and the Gold Rush preceding the Civil War. Following detailed lessons and accounts of the war between the North and South, and the following Reconstruction, the lessons detail the growth of industry in the final decades of the 19th century. America’s role in 20th century history will be studied in the book on world history. This study is useful for grades 8 or 9.

Lesson One: The Louisiana Purchase 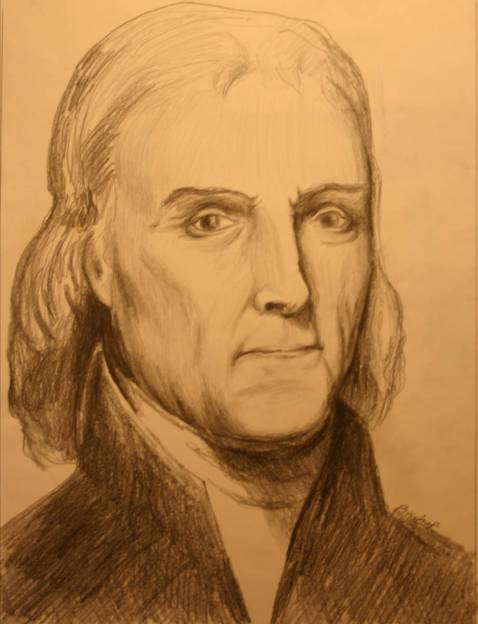 One way to begin a lesson in nineteenth century history is to create a sense of perspective by accenting the differences between the world then and now. It is helpful to remind students of how strikingly different the world was just 200 years ago—no electricity, no phones, no cars, trains or planes, not even a steam ship. Travel was by horse or on foot. The telegraph was two generations away. Photography had yet to be developed. And the “high tech” world of computers, Internet and cell phones could not have been imagined. Life for most people was arduous, and there was little “free time.” No white American of the time had been overland from the Eastern states to the Pacific (although Cabeza de Vaca, a Spaniard, had done it several centuries earlier). The west was largely unknown, except to the Native Americans who made it their home. For them, the strange white people moving westward were a novelty—and also a threat and a danger.

After the War of Independence with Great Britain, the new nation—thirteen states along the East coast of the Atlantic—grew and prospered rapidly. One of the most significant developments took place when Thomas Jefferson was President—an event described as the most important land deal in history.

When Jefferson took office as the third President, the United States was still a relatively weak country with many potential enemies. Spain, England and France still claimed huge territories in the New World and had ambitions for developing them. Jefferson was a visionary and realized that if the young nation did not grow, it might soon be hemmed in by strong European states, especially in the vast regions of the west, stretching beyond the Mississippi through the largely unexplored lands that reached to the distant Pacific.

As a result of war and treaties, the French gained many of Spain’s holdings in North America, including New Orleans, the thriving city at the mouth of the Mississippi on the Gulf of Mexico. Jefferson feared that Napoleon, the ambitious French ruler, desired to build a French empire in the new world.

In 1802, Jefferson sent James Monroe to Paris to offer to buy New Orleans. Monroe had permission to offer as much as ten million dollars. The French refused the offer but made one of their own. Not only were they willing to give up New Orleans, they offered to sell off all their land claims in North America west of the Mississippi, an enormous stretch of land—larger than the country of France itself. James Monroe did not have the authority to make the purchase, but he had the foresight to realize that it was an offer too good to refuse. So he accepted without first getting the approval of Jefferson and the Congress. (It might have taken months for the news to reach Washington and for an answer to return across the Atlantic). When Jefferson heard of Monroe’s acceptance, he overcame his doubts and approved the purchase. 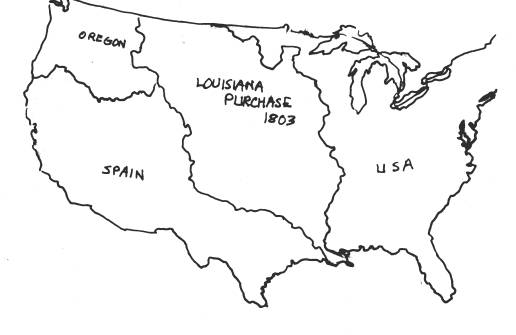 With a stroke of the pen and for the paltry sum of fifteen million dollars (the cost of some mansions in exclusive neighborhoods today) the United States doubled its land mass, acquiring an enormous stretch of land from the Mississippi River to the Rocky mountains—virtually all of France’s holdings in the new world south of the present day Canadian border. This opened the way for westward expansion.

The Louisiana Purchase has been called the biggest real estate transaction in history. The United States purchased the land that eventually became twelve mid-west states from the Canadian border to the Gulf of Mexico and from the Mississippi River to the Rocky Mountains. What are now the states of Iowa, Missouri, the Dakotas, Montana, Wyoming, Colorado, Nebraska, Arkansas, Kansas, Oklahoma, Louisiana and part of Minnesota were all included in the Louisiana Purchase territory. It was an immense area of land and it doubled territorial United States in a single moment.