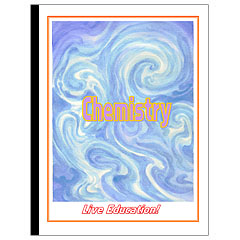 This 3 week main lesson study is an introduction to the basic processes in inorganic chemistry. Beginning with various manifestations of combustion including the phenomenon of oxidation, the lessons and demonstrations then move into the salt forming process (acid and bases) and finally the qualities of solutions, solvents, and catalysts. Much of the material is given practical application such as studying the effects of acid rain, investigating the nitrogen cycle, or in understanding the chemical processes in quicklime and mortar.

Topic: The Chemistry of the Limestone Cycle 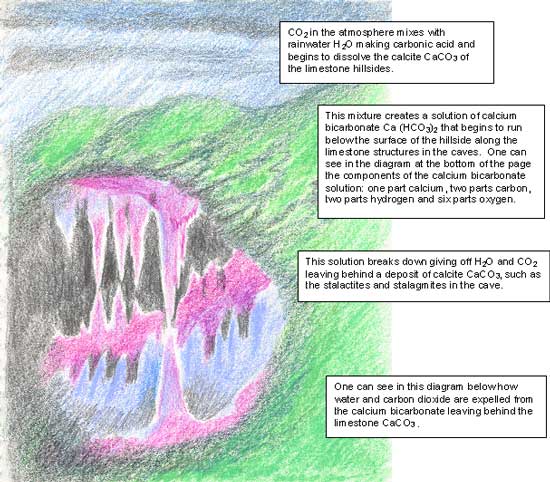 The limestone that is deposited from the calcium bicarbonate creates the stalactites and stalagmites within the recesses of the underground cave.

This continual dissolution and depositing of limestone is the basis of the limestone cycle of the earth. Dissolved calcium from these underground structures and chalky hillsides is carried out to sea where it is absorbed by tiny sea creatures to create their shells. In time, the cast off shells create layers upon the ocean floor through sedimentation. Over great cycles of time these calcium layers are crystallized into chalk and limestone formations. In places where the sea floor is raised due to a volcanic action or through the movement of the tectonic plates pushing into one another, the calcium-rich layers become chalk and limestone mountains where the process begins again. The Jura Mountains in Europe, the Dolomites in Italy, the White Cliffs of Dover in England are examples of limestone and chalk formations. Anywhere that one finds underground caverns and sinkholes, a hollowing out that happens beneath the surface of a lime-rich ground, one is beholding the limestone cycle at work.

The illustration of the limestone cycle along with explanation of the chemical processes at work can be drawn and writing into the student’s main lesson book.

The student can draw a picture of a limestone kiln in the main lesson book and write a short description of its operation in making quicklime.

We don’t have a kiln to burn limestone but acid is a kind of fire related to combustion that will break down calcium carbonate and release carbon dioxide. Some calcium formations such as shells, marble, or chalk can be placed in a solution of hydrochloric acid (30%). Most folks with a swimming pool can give you a few ounces of this. It is called muriatic acid. Usually at a pool supply house, one has to buy this by the gallon.

First place the shells in a beaker. Then put a small amount of water on them. Observe that nothing happens other than a few air bubbles. Now a small amount of hydrochloric acid (less than a fluid oz.) is carefully added until one observes how the shells begin to move and foam. One smells a “seaside” odor. While this process is happening, one can cover the beaker with a plate to trap the gas that is being formed while the shells are dissolving . When the foaming stops, the acid is no longer active. Ignite a bit of broom straw, let the flame go out so that the straw is still glowing. Lift a corner of the plate and insert the glowing punk among the gas collected above the solution. Carbon dioxide that has been formed from the chemical reaction extinguishes the flame.

Danger: Hydrochloric acid is a dangerous substance, and great care should be taken in the handling and disposal of it. Keep away from one’s eyes, do not splash when pouring. It will corrode metal sinks if not flushed with water. Dispose the tiny amounts in the toilet with lots of water.