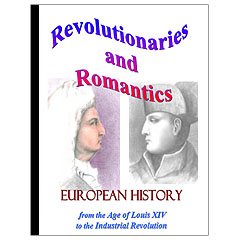 This historical study chronicles major developments in the 18th and 19th century Europe. The student will live into the life of the court of Louis XIV at Versailles and gain an understanding of how the French Revolution of 1789 was imminent. The study then moves from the Napoleonic era into the rise of the Industrial Revolution. In contrast to the mathematical/scientific worldview and the horrible living conditions of the factory city, champions of the imagination such as Wordsworth, Blake, and Goethe promoted the counter worldview known as Romanticism. This study is useful for grades 8 or 9.

As revolutions made gains for individual liberties, and the common populace was able to break free from the tyranny of absolute monarchies such as we saw in France a new era seemed to be at hand. Yet already at the end of the 18th century and on into the next century, a new oppression arose: the tyranny of the factory city. Unlike the medieval city with the cathedral and tower as its center, this new urban development, had its center focus upon the railroad and factory. The factory claimed the best sites in the city, usually near water for the sake of steam power and for a sewage dump. As industrialists vied with one another for the parcels, an unplanned makeshift monstrosity of the factory city, unfit for human habitation by contemporary standards, was heaved upon the landscape.

Charles Dickens called this cramped swarm of dwellings thrown back to back, crouched between factory and slagheaps, Coketown. Hugh Miller, a contemporary of the inception of the factory city gives this description of Manchester in 1862:

Nothing seems more characteristic of the great manufacturing city though disagreeably so, than the river Irwell, which runs through the place. The hapless river, a pretty enough stream a few miles up, with trees overhanging its banks and fringes of green sedge set thick along its edges, loses caste as it gets among the mills and print works. There are myriads of dirty things given it to wash, and whole wagonloads of poisons from dye houses and bleachyards thrown into to it to carry away; steam boilers discharge into it their seething contents, and drains and sewers their fetid impurities; till at length it rolls on, here between tall dingy walls, there under precipices of red sandstone, considerably less a river than a flood of liquid manure. 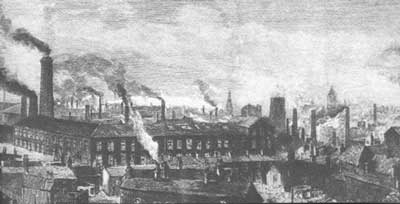 What had happened in the course of history was that the absolute despot, a monarch such as Louis XIV for example, was no longer one man. No, indeed, with the rise of individual liberties, it became possible for every person with wealth, the landowner, landlord, factory owner, capitalist, etc. to become a despot exerting his personal will and vision upon the landscape and society. The factory city arose as the confluence of dozens of factory kingdoms each with their own tyrant ruling from afar in his lavish country estate as effectively removed from the workers living conditions as King Louis in Versailles.

The 18th century had seen a great increase in the population of Europe; many were drawn to the factory cities for work. As the town became a city with each new factory, the older structures, often several stories in height, that had once housed a single family, became tenement dwellings. Each room now housed an entire family. The absence of plumbing and a fresh water source, a non-existent garbage collection service, made such sections of the city a cesspool of filth and disease to a level of foulness far beyond the lowest peasant’s cottage of medieval Europe. At times, the poor were forced by necessity to go begging not for bread, but for clean water in the middle class sections of the city. Under such conditions, sanitation and hygiene were not an option and diseases such as typhoid often spread through the factory sections. More houses were thrown up in between and back to back among the existing dwellings until a single seamless tenement was created. Many of the rooms housing a family had no windows. A new entity came into the being with Coketown, the slum. Peasant life in medieval Europe was not a picnic, but it afforded one with fresh air, clean water, open space and vistas, a warm hut, and a garden, all unattainable luxuries for the factory town.

[The] pale morning showed the monstrous serpents of smoke trailing themselves over Coketown. A clattering of clogs upon the pavement; a rapid ringing of bells; and all the melancholy mad elephants, polished and oiled up for the day’s monotony, were at their heavy exercise again. Every man was in the forest of looms [attentive] to the crashing, smashing, tearing piece of mechanism at which he labored.

So many hundred Hands in the Mill; so many hundred horse Steam Power. It is known, to the force of a single pound weight, what the engine will do; but, not all the calculators of the national debt can tell me the capacity for good or evil, for love or hatred, for patriotism or discontent, for the decomposition of virtue into vice, or the reverse, at any single moment in the soul of one of these its quiet servants with the composed faces and the regulated actions.

The day grew strong, and showed itself outside, even against the flaming lights within. The lights were turned out, and the work went on. The rain fell, and the Smoke-serpents, submissive to the curse of all that tribe, trailed themselves upon the earth. In the waste-yard outside, the steam from the escape pipe, the litter of barrels and old iron, the shining heaps of coals, the ashes everywhere, were shrouded in a veil of mist and rain.

A sunny midsummer day. There was such a thing sometimes even in Coketown. Seen from the distance in such weather, Coketown lay shrouded in a haze of its own, which appeared impervious to the sun’s rays. You only knew the town was there, because you knew there could have been no such sulky blotch upon the prospect without a town. A blur of soot and smoke, now confusedly tending this way, now that way, now aspiring to the vault of Heaven, now murkily creeping along the earth, as the wind rose and fell, or changed its quarter: a dense formless jumble, with sheets of cross light in it that showed nothing but masses of darkness, Coketown in the distance though not a brick of it could be seen.

The streets were hot and dusty on the summer day, and the sun was so bright that it even shone through the heavy vapor drooping over Coketown, Stokers emerged from low underground doorways into factory yards, and sat on steps, and posts, and palings, wiping their swarthy visages, and contemplating coals. The whole town seemed to be frying in oil. There was a stifling smell of hot oil everywhere. The steam engines shone with it, the dresses of the Hands were soiled with it, the mills throughout their many stories oozed and trickled it. The atmosphere of these fairy palaces was like the breath of the simoom [a sand-filled hot desert wind] and their inhabitants, wasting with heat, toiled languidly in the desert. But no temperature made the melancholy mad elephants more mad or more sane. Their wearisome heads went up an down at the same rate, in hot weather and cold, wet weather and dry, fair weather and foul. The measured motion of their shadows on the wall, was the substitute Coketown had to show for the shadows of rustling woods; while, for the summer hum of insects, it could offer, all the year round, from the dawn of Monday to the night of Saturday, the whirr of shafts and wheels.

Relying on Dicken’s description, draw a picture of Coketown.

Go to the encyclopedia and read about coal and coal mining. What is coke? Why does Dickens call this factory town Coketown?

Why does Dickens call the oily and sooty factories fairy palaces?

Why does Dickens refer to the factory workers as Hands rather than persons?

Of his book entitled Hard Times, Dickens wrote, “my satire is against those who see the figures and averages and nothing else. The representatives of the wickedest and most enormous vice of this time.”

Pictured below is a London slum of 1870 by Dore. Notice over the houses the archway supporting train tracks and the outhouses in every backyard. 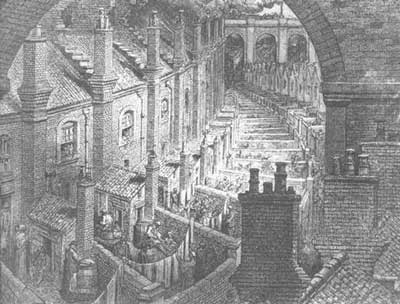