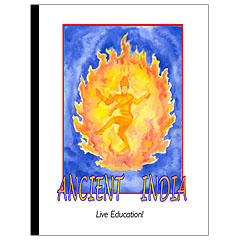 Four great historical and cultural epochs within the course of the evolution of human consciousness are studied in the fifth grade year. One begins with two great ancient cultures from India and Persia that preceded the cradle of civilization as it appeared in Mesopotamia. Within the study of ancient India, stories of some of the principal deities and avatars such as Krishna and Rama are introduced and the development of Indian culture. The book concludes with a shortened version of India’s great epic the Ramayana. Activities include writing Sanskrit, composition, watercolor painting and color pencil drawing. 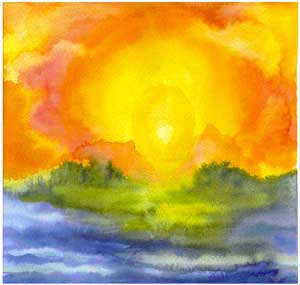 The above illustration is one of many paintings that could accompany this block. A similar illustration could be drawn with color pencil in the main lesson book to accompany the Dictation/Writing Activity.

Begin the painting by layering horizontal strokes of Prussian blue across the bottom half of the wet painting paper. While the blue is wet, lift out some of the paint with a dry brush. Clean and dry the brush several times, each time lifting out more blue to form the foam of the waves. Keep the motion horizontal and gentle. With all of the blue cleaned out of the brush, drop some golden yellow in the center of the white area (lifted out of the blue). This is the golden egg in the ocean in the midst of the ocean. Surround this egg above with lemon yellow and let it spread out over the whole upper portion of the page to form the sky above. Some of the yellow will mix with the blue below–this forms the earth and land on the sea and by letting the color spread one sees the beginnings of vegetative growth. Light touches of orange and red mix with the yellow of the sky to form the glorious heavens as the egg expands.

The ultimate reality in Hinduism is the One God, the supreme deity who transcends all that exists. This One God is known as Brahman and often is portrayed as Vishnu.

However, in the workings of the created world, Hindu thought perceives three primary aspects of the divine at work: creation, preserving, and assimilation/transformation. These three primary energies are personified as the Creator god (Brahma), the Preserver God (Vishnu), and the Destroyer God (Shiva). The Lord sustaineth (preserves), the Lord giveth (creates), and the Lord taketh away (destroys).

In the beginning, before time, all was wrapped in primordial undifferentiated gloom. There was no thing that could be defined, no thing that could be expressed, and no thing that could be known. All was shrouded in an infinite gloom of deep sleep. The cosmos was not dead before the beginning of time, rather, it was burgeoning with the primordial potential for all forms both heavenly and earthly and all living things. Where had this potential for all things come from? These potentials were carried over from the previous aeon and now awaited a new manifestation, for when God awakens from out of his primordial slumber, all the universes come into being and when his day ends and he falls asleep once again, all universes go out of being only to be recreated again with his next awakening. One day of God encompasses a span of time that the human mind cannot comprehend.

The self-born Supreme Being became manifest in subtle forms unseen—as intelligence and as sense of self or “I-ness”; as mind and sense. Finally he manifested in myriad forms that can be perceived.

Brahman, the Supreme Being, having desired to manifest the world of beings by a mere act of will or by whim, created the waters of existence that covered and contained all things. Into the primal waters he cast a seed, which emerged from the depths transformed into glowing golden egg, resplendent like the light of the sun. Dwelling within this egg was Brahma the Creator who remained there for one celestial yearâ€¹a span of time incomprehensible to the human mind. Then Brahma, from within the egg, split it into two halves and made the sky and heavens out of one half, and the earth out of the other half. Then, beginning from the most subtle to most dense, Brahma created all that exists upon the earth. First he created the host of spiritual beings, and the demi-gods, then the fire, air, the sun, stars, planets, and these set the course of time in motion; then rivers, seas, mountains, and the hilly and level ground. He created also the faculties of the human being: speech, desires, passions and pleasures, and all the beings that dwell upon the earth. Brahma used names and functions for the different created objects that one would find in the sacred scriptures known as the Vedas. For in the beginning, all that is contained in the Vedas is contained in the Supreme Self. This wisdom lies dormant until the universe is manifested.

Brahma saw the world of human beings before it began and sought to order the social working of humanity by means of his own form. From his mouth and head sprang the priestly caste known as the Brahmans, for the function of the mouth is to bear the holy word of god and inquire with knowledge and discrimination into the workings of the universe both visible and invisible. From his mighty arms came the warrior and ruler caste known as the Kshatriyas, for the function of the arms is to protect and build. From his middle parts came the merchant and agricultural caste, the Vaisyas. For their function is to provide sustenance as do the middle parts of the body. Finally from his legs sprang the Sudras or the servant caste, for the legs serve to carry and uphold the entire body.

All that was to come into being was conceived in the great being of Brahma. Then he split himself into two beings, becoming male in one half and female in the other half. The male and female together begat a son known as Viraj. Viraj is the father of Manu, he who dwelt upon the earth at the time of the Great Flood.

Also from the first divine couple that was made from Brahma’s being came the ten lords of Being. These creative beings sprung forth from Brahma, created all the things of heaven and earth: all heavenly hosts, demi-gods, demons, men, Nagas, (snake deities), serpents, the forefathers existing in other worlds, clouds, thunderbolts, lightning, rainbows, meteors, birds, worms, beasts, insects, and the plants which burst out of the earth. Thus are all forms of life from the heights of heaven to the blades of grass upon the earth, subject to ever changing, transmigration of birth and death.

The great Brahman, the Supreme Being, who is beyond all creation, who dwells before time and before universes is also known as Vishnu. The universe eventually dissolves into his sleep, and then all that remains is the universal ocean of non-existence. This is the gloom of undifferentiated darkness and deep sleep.