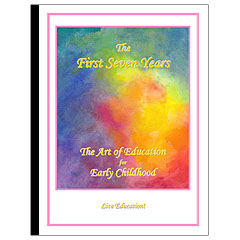 This book speaks with deep wisdom and descriptions of Rudolf Steiner’s insights into the developing child in his first seven years of life and how best to raise and educate a child at this stage. This book provides the background to the “hows and whys” of the Waldorf approach to Kindergarten education.

Insights and Indications on Early Childhood from lectures by Rudolf Steiner

In this first extract taken from Steiner’s lectures at Torquay (often referred to as The Kingdom of Childhood) one of the most important observations of the child from birth to age seven is presented. This is the perception that the whole being of the child is a great “sense organ.” The adult is able to shut out the sense impressions of the eye and ear; in some manner ward off, choose and discriminate among the bombardment of stimuli. But the infant and young child is so delicately sensitive to the surrounding environment that the sense impressions work right into the very physiology of its being. An understanding of this primary phenomenon should lead the teacher toward a conscientiousness in how one speaks, the mood of soul that one lives in daily and consequently projects into the world, the environment provided for the growing child, the effects of media, in short, all that comprises the influx of sense impressions that the child will drink in as the very forces that will build its bodily constitution.

Two points of clarification can be made in advance: First is the insight that during the child’s first seven years, a second delicate refined “body” or organism is growing concurrently with the child’s physical body, and this second “body” will find it’s correlative birth at some point near the age of seven which is often signaled by the change of teeth at that age. Rudolf Steiner calls this the “life body”, the “body of formative forces” or the “etheric body”. These formative forces are not only the well-spring of health throughout life and the bearer of memory, but are also the sculptors of the child’s very physiology, from the structures and connections made within the brain to the very functioning of the organs and bodily systems.

Second is the analogy of the eye as the way a child is wholly a sense organ, that the child before the age of seven is “wholly an eye.” Yet Dr. Steiner also describes this same phenomenon from the point of view of the ear, and one might say the child is “wholly an ear.” Most parents observe that the infant who is learning to crawl about is prone to put nearly everything he finds right into his mouth—one has the distinct impression when observing such behavior that the infant is wholly a tongue or a tasting organ.

…the child’s development undergoes a radical change with the loss of his first teeth. For in truth, what we call heredity or inherited characteristics are only directly active during the first epoch [first seven years] of life. It is however the case that during the first seven years a second life organism is gradually built up in the physical body, which is fashioned after the model of the inherited organism. This second organism is, we may say, completed at the changing of the teeth. [typically during the sixth year] If the individual who comes down out of the spiritual pre-earthly world is weak, then this second life organism is similar to the inherited one. If the individual is strong, then we see how in the period between the change of teeth and puberty, from seven years till about fourteen, a kind of victory is gradually accomplished over the inherited characteristics. Children become quite different and they even change in their outward bodily form.

It is especially interesting to follow the qualities of soul which now reveal themselves in this second life epoch. [the ages of 7 to 14] In the first epoch, before the change of teeth, we may describe the child as being wholly “sense-organ”. You must take this quite literally: wholly sense-organ.

Take for example the human eye or ear. What is the characteristic of such a sense-organ? The characteristic thing is that the sense-organ is acutely sensitive to the impressions of the outer world. And if you observe the eye you can certainly see what kind of process takes place. The child during the first seven years is really completely and wholly an eye. Now consider only this thought: in the eye a picture is formed, an inverted picture, of every external object. This is what ordinary physics teaches everyone. That which is outside in the world is to be found within the eye as a picture. Physics stops here, but this picture-forming process is really only the beginning of what one should know concerning the eye; it is the most external physical fact.

But if the physicist would look upon this picture with a finer sense of observation, then he would see that it determines the course of the circulation of the blood in the choroid [the middle layer of the three layers of the derma of the eye]. The whole choroid is conditioned in its blood circulation by the nature of this picture within the eye. The whole eye adjusts itself according to these things. These are the finer processes that are not taken into consideration by our ordinary physics. But the child during the first seven years is really an eye. If something takes place in the child’s environment, let us say, to take an extreme example, a fit of temper when someone becomes furiously angry, then the whole child will have a picture within him of this outburst of rage. The etheric body makes a picture of it. From it something passes over into the entire circulation of the blood and the metabolic system, something which is related to this outburst of anger.

This is so in the first seven years, and according to this the organism adjusts itself. Naturally these are not crude happenings, they are delicate processes. But if a child grows up in the proximity of an angry father or a hot-tempered teacher, then the vascular system, the blood vessels, will follow the line of the anger. The results of this implanted tendency in the early years will then remain through the whole of the rest of life. These are the things that matter most for the young child. What you say to him, what you teach him, does not yet make any impression, except in so far as he imitates what you say. But it is what you are that matters; if you are good this goodness will appear in your gestures, and if you are evil or bad-tempered this also will appear in your gestures—in short, everything that you do yourself passes over into the child and pursues its way within him. This is the essential point. The child is wholly sense-organ, and reacts to all the impressions aroused in him by the people around him. Therefore the essential thing is not to imagine that the child can learn what is good or bad, that he can learn this or that, but to know that everything that is done in his presence is transformed in his childish organism into spirit, soul and body. Health for the whole of life depends on how one conducts oneself in the presence of the child. The inclinations which he develops depend on how one behaves in his presence.

…if we were simply to have the children there in the Kindergarten and so conduct ourselves that they could imitate us, if we were to do all kinds of things that the children could copy out of their own inner impulse of soul, as they have been accustomed to do in the pre-earthly existence, then indeed the children would become like ourselves, but it is for us to see that we are worthy of this imitation. This is what you must pay attention to during the first seven years of life and not what you express outwardly in words as a moral idea.

If you make a surly face so that the child gets the impression you are a grumpy person, this harms him for the rest of his life. This is why it is so important, especially for little children, that as a teacher, one should enter very thoroughly into the observation of a human being and human life. What kind of school plan you make is neither here nor there; what matters is what sort of a person you are. In our day it is easy enough to think out a curriculum, because everyone in our age is now so clever. I am not saying this ironically; in our day people really are clever. Whenever a few people get together and decide that this or that must be done in education, something clever always comes out of it. I have never known a stupid educational program; they are always very clever. But it is not a question of having programs of this kind. What matters is that we should have people in the school who can work in the way I have indicated. We must develop this way of thinking, for an immense amount depends upon it, especially for that age or life epoch of the child in which he is really entirely sense-organ.

Now when the change of teeth is complete the child is no longer a sense-organ in the same degree as previously. This already diminishes between the third and fourth year, but before then the child has quite special peculiarities of which one generally knows nothing whatever. When you eat something sweet or sour you perceive it on the tongue and palate, but when the child drinks milk he feels the taste of milk through his whole body for he is also an organ of sense with regard to taste. He tastes with his whole body; there are many remarkable instances of this.

Children take their cue from the grown-ups and therefore at fifteen, sixteen or twenty they are, nowadays, already blasé and have lost their freshness, but there are still children to be found who in their early years are wholly sense-organ, though life is not easy for such. I knew for example a small boy who on being given something to eat that he knew he would enjoy, approached the delectable object not only with those organs with which one generally approaches food, but he steered towards it with his hands and feet; he was in fact wholly an organ of taste…