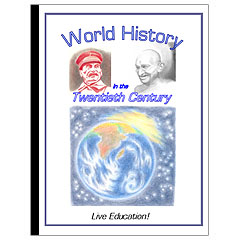 This historical overview of the 20th century can be used for teaching a 3 to 4 week block in 8th or 9th grade. It begins with the great land grab of the late 19th century: British Imperialism, and European colonization of entire continents. These acquisitions were the prizes that awaited the victors of World War I, carried out with such ferocity that half the male population of Europe was decimated in four short years. This study investigates the rise of totalitarian societies such as Nazi Germany and Stalinist Russia (studied through a retelling of Orwell’s Animal Farm) and examines the differences between first world and second world points of view, Democracy and Marxism. The 20th century also saw the rise of great technological advances, new worldviews of our universe, and the exploration of the human psyche.

This is one of the most common criticisms of Marxist ideas: that in practice, Marxist societies do not work and rather than leading to a condition of equality, lead rather to totalitarian governments. In the Marxist ideal, the executive committee ruling class who orchestrate the last stage of revolution leading to the classless society should wither away as the class distinctions begin to disappear. In Stalin’s Russia, the ruling class, or state, actually became more powerful installing a regime of terror and a concentration camp economy—conditions far worse than during the time of rule by the Czar.

Another point is that the predictions of this theory of history are not fulfilled: under most Marxist regimes, the working class [proletariat] is increasingly pauperized. Also, the capitalism of the West did not fail due to its own “inherent contradictions” as predicted. Although the Great Depression of the 1930’s seemed to be a fulfillment of this prophecy, sometimes, in opposition to Marxist views, wealth is created solely from creativity, innovation, new technologies, etc. rather than the production of commodities and the continued creation of new markets. Third, unforeseen conditions arose in the 20th century that Marxism cannot account for. Marx and his proponents did not foresee the rise of Fascism in Germany and Italy, nor did they anticipate the way future technologies, such nuclear energy, would restructure political power.

Karl Popper wrote in the Open Society, that Marx was a false prophet for his theory insisted upon changing the whole of an existing society. Popper thought that this was wrong because it was unscientific and could not be tested. He preferred changing societies piece by piece. In this way, each new element that had been introduced could be tested to see if, in fact, an improvement had happened. In this way, Popper concluded that democracy is the only viable possibility for a government, for it employs this trial and error way of change in its very structure. Small changes informed by historical experience and put to popular vote allow a government to change gradually without bloodshed. Popper thought that political solutions and governments [including democratic governments] were like scientific solutions: they are always provisional [never absolute for all time] and are always open to improvement.