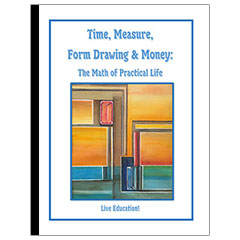 In this study student enters into the conventions for the measure of time, lengths, weight as well as fluid and dry measure. The four processes are applied in practical ways to the world of measure. There is also an overview for math goals in the third year as well as rhythmical exercises for learning the times tables during the opening activities of the morning.

This is a fascinating project for the student, and it can also be related to the presentation of life in Egypt during the time of Moses. This can be made as simple as a stick placed in the ground surrounded by marker rocks, or it can be constructed from a dial of wood with gnomon (the upright pointer) made from metal or wood.

The upright pointer is set to point at the North Star in the Northern Hemisphere. This could be a fun family project, for in the evening, the family will be outside and locate the North Star and plant the pointer in the ground at an angle that points at the North Star. You can calculate the angle ahead of time, for the angle is equal to one’s latitude. The 38 degree latitude line crosses through the middle of much of the USA, so this will be a relevant measure for many families. Obviously, the farther south that one travels, the lower the North Star will be on the horizon. In the far north, the pole star will be nearly directly overhead. If you haven’t learned how to find the North Star, this would be a good time to learn. Any beginning book on astronomy will show you how to do this. In the illustration above, a fin made from plywood was secured to a circular base also made of plywood. Wood screws through the opposite side of the bottom hold the gnomon (fin) in place. This way the apparatus can set on a table. Notice that the angle of the gnomon (fin) is cut to 38 degree (measured with a simple plastic protractor) —-or to the latitude of one’s locale.

Before going out at night to set the sundial pointing to the North Star, the home teacher might want to tell of how travelers who crossed the desert during the night —for sometimes it was too hot to travel during the day— had to use the stars for navigation. Or she may wish to tell the story of Abraham and lead up to the point in the story where God tells him that his descendants will be as numerous as the stars in the sky. Make a hot drink to share while you are together outside in the cool air. Locate the North Star, and plant the pointer stick in the ground, or if you have made the sundial above, align it with the North Star.

Tomorrow, you will come out each hour to the pointer, and place a stone marker for each hour of the day or make a mark on the dial. It’s important that the pointer is placed in an open area so that other shadows from nearby trees or houses do not block it.

Since the gnomon is pointing at the North Star, then the angle it makes to the horizontal ground will be equal to the latitude of one’s position on earth. Thus if you live on the 45 degree latitude line then the stick should be at a 45 degree angle to the ground. If you live closer to the equator, say at a 30 degree latitude, then the North Star will be lower on the horizon, and the stick will be at a 30 degree angle to the ground.

Dry Measure and the Farm

Fluid Measure and the Kitchen