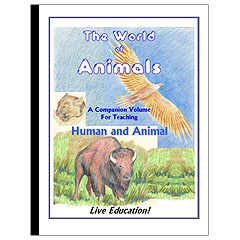 The World of Animals

This is the companion volume to Human and Animal that provides the teacher with the daily main lesson content for 6 to 8 weeks of lessons.

There is another creature quite similar to the cuttlefish in many ways for it too can squirt out jets of water to propel itself, and can also hide behind a cloud of ink; it too, has tentacles that reach out to seize hold of its prey, but this creature is much larger, and it has quite a pronounced large head. We would have to say that this creature is also a head animal. Do you know what creature I am thinking about? There is one giant variety of this sea creature whose span of tentacles can grow to lengths of almost 30 feet. Imagine that! Its reach spans the entire width of this room.

Yes. It is the octopus. It is really quite a fascinating creature for it is very intelligent, perhaps one of the most intelligent creatures of the sea, at least the most intelligent among those animals known as invertebrates. It possesses a large brain in comparison to similar animals. Its system of camouflage is remarkable. You know how a person’s face may change to show their feelings and emotions. When a person becomes sad, the features of their face begin to droop; their eyes look like they are ready to produce tears. And when someone becomes angry, their face often becomes red. When one is fearful the blood flows out of the face and one becomes paler. There are probably hundreds of facial expressions showing the many ways one feels. [The teacher may invite some response from the student describing various emotions: indifference, happiness, worry, interest, etc.] We might say that the whole octopus is very much like the expression we show with our face. For instance, an octopus may change its appearance as many as twenty times in a minute. It too becomes red when angered, or pale with fear, just like a human face. This creature possesses special pigment cells that it can control, which will mix different colors together so that it can blend in with almost any background. But not only can the octopus change color, it can also change the texture of its skin from a smooth to a rough-looking surface. Now imagine for a moment, a shark or barracuda swimming along looking for a meal. (Both shark and barracuda, as well as seals, will eat an octopus.) The octopus however keeps changing its appearance mixing up the colors and the texture of its skin. The barracuda thinks it’s a flounder, no, that’s a rock, no it’s a fish, until finally, it swims away confused looking for clearly defined prey. That is only one of the ways the octopus shows its cleverness.

The creature is very large but extremely flexible. An octopus that is nearly as large as a person can squeeze its body through the tiniest of openings. It is only limited to the size of its beak and the casing around its brain–both about the width of its eye. Yes, I said “beak”: the octopus possesses a beak that it uses in a manner similar to a bird. It looks very much like a parrot’s beak. It can break open almost any shell with this strong and sharp tool. You will find this beak at the center of the radiating tentacles. But most often it will open shells with the powerful suckers that line its tentacles. And by the way, you can usually tell where an octopus lives–usually a crevice between rocks–for it leaves a mess of discarded shells outside its front door. It’s almost unbelievable however, how small of an opening the octopus can squeeze through, but this too is one of the ways that the octopus can escape a shark or seal. Imagine that it spies a shark. It shoots out the cloud of ink to confuse the predator and then squeezes its entire body into a narrow crevice between rocks. When the cloud of ink clears, the shark looks around and cannot see any sign of the octopus–it’s as if it had disappeared by magic!

There was once an octopus kept in captivity that disappeared like this. It was a medium sized octopus, about ten feet wide from one tentacle to the other just about the width of two students like you. But one morning, the attendants who care for the animals looked in the tank holding the octopus and could not find it anywhere. Everyone thought that the octopus had escaped, for they have been known to actually crawl out of their tank at night when it is quiet, and make their way into another tank full of tasty fish snacks. Then having eaten their fill, climb out of the fish tank, slither across the floor and make their way back into their own tank. In the morning, the attendants find water on the floor, an aquarium missing fish, and an innocent looking (yet well-fed) octopus minding its own business in its tank. So the keepers thought that the octopus had made its way into another tank and was hiding out. But an extensive search revealed no sign of the creature. Everyone was baffled–there was no reason to believe that anyone had made off with a pet octopus. However when it came time to clean the tank where the now missing octopus had dwelt, a worker pulled up the filter plate that helps to keep the water clean, and there was the octopus. It had compressed its enormous body narrow enough to squeeze through a two inch wide drain pipe! The only way to retrieve the octopus was to take apart the entire filtration system.

So we can see that this is a creature that is very clever in the many ways that it can hide itself. Again it is analogous to our face, for don’t people often find ways to hide what they feel so that it doesn’t show? But the octopus is clever in other ways as well. Attendants at aquariums usually have stories to tell about the octopus. You know that the octopus propels itself through the sea in a way similar to the cuttlefish, by squirting a jet of water. While in captivity, this ability can be used as a very hefty squirt gun delivering at once a gallon of icy cold water. One octopus had the habit of letting the keeper know that it was hungry by drenching him from behind if he passed by without offering any food. An octopus will use this trick when it is displeased with someone, and they do recognize one person from another, so it is only the person that they do not like who becomes the target. One octopus developed the habit of unlatching the lid of its tank by reaching a tentacle through one of the air vents. The keeper came by and noticed that the lid was unlatched and open, and that the octopus was beginning to make its way out of the tank, so she immediately pressed down on the lid and locked it in a way that thwarted any more “lock-picking.” This must have made the octopus displeased with her, for every time she passed the tank for the next week, she was greeted with a blast of ice water. She was the only target for this behavior, for other attendants passing by would be ignored.

At another aquarium, the octopus had a unique way of letting the keeper know whether or not it approved of the day’s meal. The keeper was serving some small squid and shrimp that was nearly ready for disposal for it was past its time of freshness. The octopus took the first offering, and then the keeper fed a few other animals. When she returned to the octopus, it looked directly at her making eye contact. It took hold of the “gamey” shrimp that she gave it, and continued to make eye contact as it crawled over to the drain and then shoved the spoiled food in where it was immediately sucked away. The octopus had showed the keeper by its actions that “this food belongs in the garbage can!”

Yesterday and today, we studied two “head” animals that are very much like the front part of our heads where we find the face. Tomorrow we will look at a creature that is much more like the back of our head where there is mostly skull.