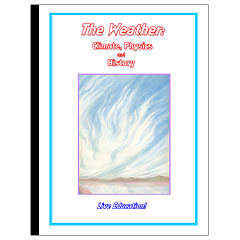 The Weather: Climate, Physics, and History

This is a 3 to 4 week study of meteorology that is taught in the 8th grade Waldorf Schools. The phenomena of weather are introduced though demonstrations of the physics of air, heat, and water. Global air masses, adiabatic temperature changes, the creation of winds, and other topics are fully explored. The book is divided into three sections, the first section introduces the elements of weather along with physics demonstrations. The second section is on learning the classification of clouds through artistic drawing and painting activities. The third section is a compendium of stories of how the weather played a role in historical events and can be interspersed throughout the main lessons of each week.

These principles of the physics of air are at work in the many manifestations of weather. It is common to most firsthand life experience that the higher elevations within the same locale are generally cooler than the lower elevations. Beneath the mantle of atmosphere that is closest to the surface of the earth [Reminder: this is the 7 ½ mile thick troposphere where most of the earth’s weather occurs] warming occurs primarily by heat absorbed by the land and sea which is then radiated back up into the atmosphere. That makes the warmest layers those that are close to valley floors. However, masses of air and the layers of atmosphere are not static, but constantly in movement either rising or falling due to their relative temperature or swept about by the winds created by pressure/temperature differences.

Imagine a large mass of air rising upslope on a mountain range from the valley below. As it rises it expands and so the same mass or parcel of air becomes less dense. It becomes less dense because air pressure decreases with altitude. [Do you remember the analogy from the first lesson about how we live at the bottom of an ocean of air that is so dense that it can crush a metal can?] But the temperature of the rising mass of air also changes: when air expands, its temperature decreases. We can see from the illustration above that the very same parcel of air will drop in temperature by approximately 5.5°F for every 1000 ft. of elevation that it rises. This phenomenon is fundamental to the study of weather. It is known as the dry adiabatic lapse rate (DALR) which describes the rate at which an unsaturated parcel of air changes temperature due to an adiabatic pressure change. The terminology is not so important; “adiabatic” means occurring without gain or loss of heat from the surroundings, while the term “dry” means that whatever the humidity of the air might be, condensation (rain, snow, etc.) does not occur in the process. Meteorologists use a rough “rule of thumb” for this rate of change of temperature, or the DALR: 30°F decrease per mile of rise. Notice from the illustration, that the parcel of air is 80°when it begins to rise from a 1000 ft. elevation, but when it reaches a 10,000 ft. elevation, its temperature will have dropped to below freezing.

This demonstration will provide a first hand experience of the principle: expanding air decreases in temperature; compressing air increases its temperature. We will need two items for the demonstration: the thin wheel with a tire from a ten speed bike (this is a narrow tire—not an off-road balloon tire—that can be inflated to 60 PSI.) and a bicycle tire pump.

The tire pump is connected to a deflated tire and the student is allowed to pump some air with several strokes. One can already take note that the pump cylinder is beginning to warm as well as the hose leading to the tire. But after only a couple of strokes, the air in the bicycle tube will actually be cooler, because it is expanding into the space. However as one continue to pump up the tire, soon the air in the tire will be at a higher pressure than the surrounding air, and the tire will also warm to the touch. 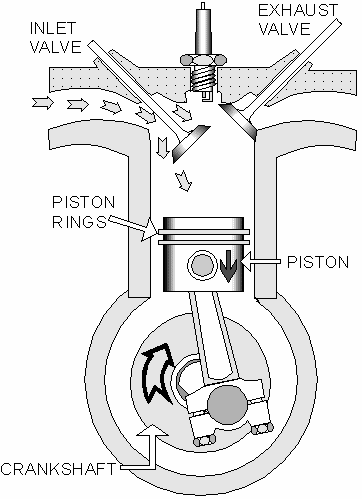 The expansion and compression of a gas to create cooling or warming is the principle in operation in many devices such as air conditioning and heating, engines, refrigeration, etc. There exists a primitive fire starter which is little more than a sealed pipe with a plunger that will effectively compress the air inside the tube. One puts a tiny piece of char cloth in the tube and then swiftly strikes the plunger. The plunger compresses the air in the tube so quickly that the temperature soars high enough to ignite the char cloth which is then used to start the fire. The piston and cylinder in the automobile engine does this as well. When the piston is in a ready position in the cylinder, a valve opens to admit oxygen and gasoline vapor and then closes to trap the gases in the cylinder. Now the piston pushes into the cylinder like a plunger and compresses the gases. The compression increases the temperature thus increasing the explosive properties of the vapors. At the point of maximum compression, the spark plug is timed to send a charge into the cylinder, igniting the compressed gases, the explosion driving the piston down with great force. The piston is connected to a crank shaft which will apply torque (turning force) to the transmission. Then another valve briefly opens to exhaust the spent gases, and the cycle resumes. However, in most automobiles, there are at least four synchronized pistons with cylinders at work, timed so that their explosions are sequential. This, of course, will send far more power to the crank shaft and wheels.

Now let us return to the illustration of the mountain showing the adiabatic temperature changes. Let’s imagine that the valley below the mountain is near the sea and is at an elevation of near to sea level—perhaps 200 ft. elevation. Also imagine (even though our illustration doesn’t quite show this) a high continental plateau, a thousand miles across, resting behind the mountain at an elevation of 5000 to 6000 ft. This plateau is primarily a wide rocky desert. During the day its temperature rises dramatically. This hot air begins to rise and creeps up the backside of the mountains. Where there exists a mountain pass, the hot air from the high plateau spills through the narrow opening down toward the valley below. The narrow mountain pass acts like a funnel that increases the speed of the hot air drifting over the mountain from the plateau side. A strong hot wind begins to course down the mountainside into the valley below. The valley has been warm all day to near 100°F temperatures and now, in the afternoon, a wind from the mountains begins to blow through the hills. But it brings no relief. The hot air from the plateau side cooled only a little bit as it rose over the slopes but now, in its 5000-6000 ft. descent, it is warming by compression—about 30° hotter [remember 30° per mile]. A 90-100° wind blows into the baking valley drying hillsides, trees and brush into fire tinder. 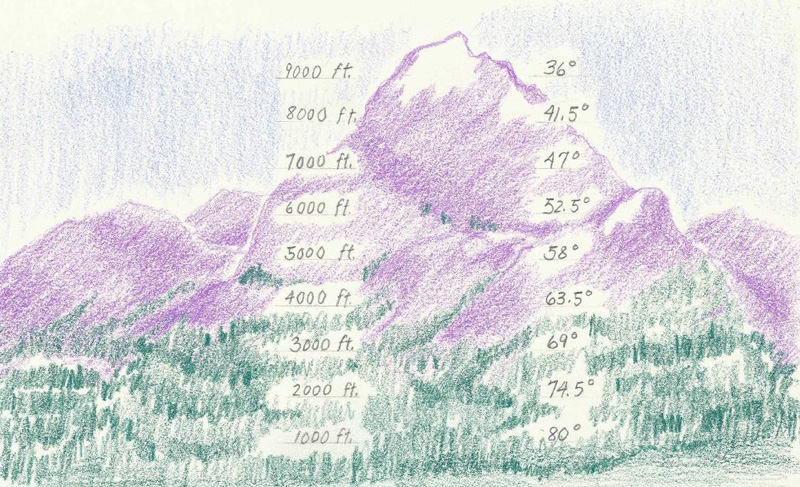 The scenario that I just described is similar to what is experienced in Santa Ana located in the southern part of the Los Angeles valley. Hot air rises in the continental plateau of the Great Basin in Nevada and Utah, and begins to spill over the Sierra Nevada Mountains. There is a narrow channel between the San Bernardino and the San Gabriel mountains where the valleys act like funnels to increase wind speed. The air grows hotter and hotter as it descends creating the treacherous Santa Ana winds.

Hot local winds formed in the way just described are common throughout the world. In the Rockies, in the late fall, rivers of cold air at the crest of the high peaks sweep down with great ferocity gaining enough speed as they blow to snap limbs from the trees and push over fences as they spill onto the prairies. The winds are so warm due to their rapid descent that the local temperature can change dramatically. In one instance the temperatures rose from -6°F to 37° F in 15 minutes. These are the Chinooks known as the “snow eating” winds. Similar winds known as the foehn are a common occurrence in the European Alps. Hot winds are called the samiel in Turkey and the simoom in Northern Africa. The words literally mean, the poison winds, for they are so hot and drying that plant life is subject to swift desiccation.

The illustration of the dry adiabatic lapse rate with correct labeling should be drawn into the main lesson book along with the basic principle on the temperature of air due to expansion and contraction. A good research activity would be to investigate the operation of a refrigerator or an air conditioner and draw a chart or illustration showing the action of the machine.

These hot drying winds are known throughout many cultures as a phenomenon that sets one’s nerves on edge. The crime rate goes up when the Chinooks are active. Consider the quotes from two different authors in the text box on the psychological qualities exhibited by ordinary people when the hot Santa Ana winds blow. Incidentally, you might detect from the sound and voice of the second quote that Chandler is famous for the “pulp fiction” detective novel style of writing.

“There is something uneasy in the Los Angeles air this afternoon, some unnatural stillness, some tension. What it means is that tonight a Santa Ana will begin to blow, a hot wind from the northeast whining down through the Cajon and San Gorgonio Passes, blowing up sandstorms out along Route 66, drying the hills and the nerves to flash point.”
Joan Didion, “Los Angeles Notebook” in Slouching Towards Bethlehem

“There was a desert wind blowing that night. It was one of those hot dry Santa Anas that come down through the mountain passes and curl your hair and make your nerves jump and your skin itch. On nights like that, every booze party ends in a fight. Meek little wives feel the edge of the carving knife and study their husbands’ necks. Anything can happen.”
Raymond Chandler, Red Wind: A Collection of Short Stories

But physicians who have studied the effects of such winds know that physiological effects, such as headaches, irritability, sleeplessness, nausea, fatigue, and hypertension also occur when these winds blow. One of the quotes above can be written into the main lesson book or the student may write a similar passage of his own creation as though writing the opening to a short story.