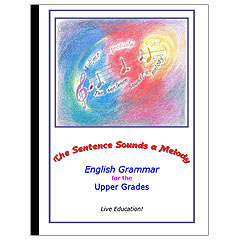 The Sentence Sounds a Melody – English Grammar for the Upper Grades

This bookprovides the grammatical studies for grades 6, 7, and 8 brought to the student with imagination and humor. A survey of the table of contents will give you some idea of the breadth of the subjects covered. Also included are valuable lists of the most common prefixes, suffixes, and roots from Greek and Latin sources, tips on how to take notes for research, and how to organize an essay.

Excerpts and Sample Lessons from The Sentence Sounds a Melody: Grammar for the Upper Grades

During a faculty meeting, Dr. Steiner had this to say to them:

If I may speak plainly, the grammar lessons are just horrible.
All the stuff which you find printed in [grammar] books ought to be burnt. [Emphasis mine]
Something living must enter the torture of undigested terminology is being inflicted upon the children.

If the children have to occupy themselves distinguishing between what one calls subject, object, attribute, indicative, subjunctive, etc., all things in which they have only a half-hearted interest, then they are put in a state where their breakfasts are boiling in their organisms quite uninfluenced by their soul lives. Then one is cultivating real stomach trouble, for example, enteric illnesses in the child, though this may reveal itself some fifteen to twenty years later.

These are some of the leading thoughts that inspired the writing of this book: The Sentence Sounds a Melody.

In the eleventh lecture of 1920 given to the teachers at Basle [The Renewal of Education] Dr. Steiner describes the inner melodic structure of a sentence:

You see, everybody knows what a melody is. Everybody knows what a sentence is. But that a sentence, consisting of a subject, predicate, and object, is really experienced in our unconscious depths as a kind of melody is known to only very, very few people. Just as we can call to mind that during sleep we become aware of the ebb and flow of our feelings rising up into the sphere of consciousness, wrapped in the garment of dreams, so we can also experience that in the depths of our being music lives in the sentence?

In our depths this sentence is experienced as a triad. What we experience in our innermost depths is really a triad, a common chord. The chord comes into being through our projecting the first tone to the words “the child”, the second tone to “writes” and the third tone to “the sentence.” In our unconscious regions, these three tones are experienced as music, as a [chordal] melody before they are clothed into pictures which correspond to reality. In our upper consciousness, they now appear as the sentence. Only by realizing that, at the moment of passing from the sense-perceptible to the supersensible realm, we have to strip off the substance of the sense world in order to experience its transformation into a musical theme, do we have a picture of the whole human being.

The wild horses galloped swiftly over the plains. The nimble frog jumped suddenly into the pond. The furry little mice nibbled the wood beneath the floorboards. That night, deep in the savannah, within a kilometer from our camp, the ravenous lions roared ferociously and continuously.

In the first sentence above the basic triad is still there: “horses” is the subject of the sentence, “galloped” the verb or predicate, and the prepositional phrase (over the plains) is functioning as the recipient, or object of the action. Those remain our basic G major triad (g-b-d).

But now we have added some additional notes creating a more involved melody:

The melody above, as written, has no indications for time, rhythm or length of the notes. But the teacher can simply allow the natural rhythms that are expressed when the sentence is spoken aloud to create the rhythm.

In this example the sentence has been written in standard notation, one possibility among many, of a melody inspired by the sentence.

Lessons in Misused Words and Expressions

Irregardless is not a word, regardless of how many times you have heard it.

Neither are authored, critiqued or gifted (used as a verb) words. An author writes a book; he does not author it.A critic may write a critique of the book or offer criticism, but he does not critique the book. The author may have given the critic his book as a gift and the author may be a gifted writer, but the book was not gifted to the critic.

Iterate means to repeat. Re-iterate would then mean to repeat again.
Did you accidentally turn the volume down on your hearing aid?
If I reiterate that query, I will have to say it two more times.

If a woman gives birth to a pair of twins, then she is the proud mother of four infants.

May the better of these two players win the trophy, and may the best player on the team be elected captain. If two athletes are racing one another, only the better man can win. “May the best man win” refers to a competition with more than two participants.

Literally means actually. If some poor fellow was literally up to his ears in paperwork, then we might imagine a clerk locked in the file storage room during an earthquake. Figuratively, the busy office manager is up to his ears in orders.

“Do you have an extra hand you can spare for a moment?” “Let me check in the closet. I think I left one there with my extra leg!”

“Can you give me a hand with this task?” “I prefer to keep my hands attached to my arms, but I will give you some help.”

Now have the student complete the thoughts in the seven clauses above by creating full sentences. In order to do this, the student will instinctively attach an independent clause to these dependent clauses, and then, following the writing exercise, you can point out the difference. For example, using the fourth clause “after the first stone plunged into the waters”, one might recall an episode from the story of Odysseus where he and his men are escaping from the blinded and enraged Cyclops, and finish the sentence in this way: After the first stone plunged into the waters, Odysseus and his men swiftly raised their sails.

Now we see that there are many sentences that have both a dependent clause as well as an independent clause. The two clauses make for an interesting and colorful sentence by taking a simple sentence “The men raised the sails” and embellishing it to convey a greater meaning and vividness to the picture it paints.

Let’s recall that fateful moment in history when Julius Caesar pondered whether or not he should cross the Rubicon with his armies and seize control of Rome. We could state that moment directly by saying:

That would be the most direct route to stating the complete thought or basic idea of that moment. But let us add a dependent clause and a prepositional phrase before stating that thought:

While he paced the bank, beside the Rubicon’s flowing waters,
Julius Caesar pondered the destiny of Rome.

What has happened? A more vivid picture has been painted by the sentence. We have taken the longer scenic route rather than the direct route to the next sentence in our story. 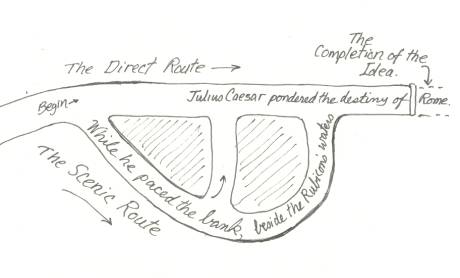 Have the student use color pencils to illustrate the sentence roadway, the direct route and the scenic route created by the dependent clause. Elaborate upon the simple sketch above and write sentences with and without a dependent clause.