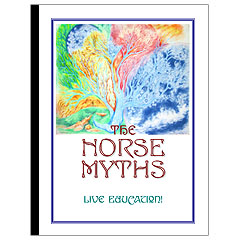 This book provides the teacher with an introduction to the pantheon of gods and goddesses of Norse mythology. Overviews of the stories are given along with daily activities for the student such as writing runes, composition writing, watercolor painting, speech exercises in the form of proverbs, and literary examples from the epic Elder Edda. 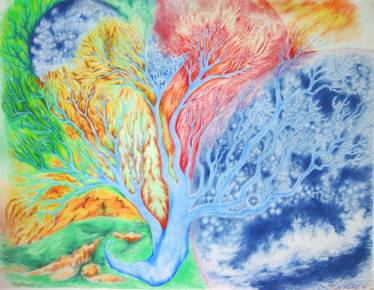 Yggdrasil is the name of the giant ash tree that reaches from the earth to the sky. It is often called the world tree. Yggdrasil is the universal tree of life. The tree grows up from the depths of the earth. So deep are its roots that no one knows their origin. The branches of Yggdrasil stretch out over the entire earth and touch the very vault of the sky. The Norns live under the tree spinning the threads of destiny for every soul born on earth. At the base of Yggdrasil, the terrible dragon called Niddhogg gnaws at the roots of the tree, while at the very top sits a stately eagle. The eagle fans his wings and rustles the leaves and branches of Ygggdrasil. The eagle and the dragon detest each other. The squirrel Ratatosk runs back and forth between the two, carrying messages of insult one to the other. Fortunately, the Norns care for Yggdrasil and it flourishes despite the presence of the destructive Niddhog. From a beautiful pond near the base of the tree, the Norns gather water each morning and sprinkle it on Yggdrasil’s roots. The magical waters heal the tree of it wounds.

I know an ash tree named Yggdrasil
Sparkling showers are spread on its leaves
That drip dew into the dales below.
By Urd’s Well it waves evergreen
Stands over that still pool,
Near it a bower whence there now comes
The Fate Maidens…

from The Elder Edda