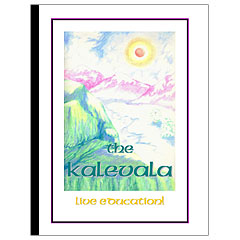 One follows the adventures of mythical “larger than life” heroes in this great national epic of the Finnish peoples. Speech exercises, poetry, geographical features, as well as drawing and painting activities are provided for a 3 to 4 week study.

The Kalevala: the Finnish National Epic

This is great epic literature that ranks in stature with the Myths of Greece or the Ramayana in India. The composer Jean Sibelius wrote many symphonic compositions from themes taken from the Kalevala. The version that follows is written in the same meter as the original Finnish. The poem is motivated forward as much by its strong rhythm as by its magical imagery. Longfellow used this same meter for his poem “Song of Hiawatha.” The epic poem consists of collection of “Runos” or separate sections, ballad-like in nature, which had been passed along from generation to generation through word of mouth. In the early 1800’s a scholar by the name of Lonnrot gathered the many pieces of the epic that existed among the elders into one collection, fitting the parts into one comprehensive whole so that the legends would not be lost to future generations. The Kalevala spans a broad reach of time from the beginning of the earth to those times in the distant past when the old magic was beginning to disappear, yet many images in the poem point toward the development of human consciousness in future ages.

There are four principal heroes in the poem. Vainamoinen is the oldest of magicians; it was he who sang the world into being as the master poet/music god. He plays his songs upon a kantele or lyre. He is also the principal patriarchal figure in the poem. His brother Illamarinen was born upon a hill of charcoal. He is a master smith and craftsman. Only Illmarinen could forge the wondrous Sampo–a fantastic mill abundant with life forces, which produces endless amounts of gold, corn and salt. In some ways the Sampo is very similar to the Grail. Near the end of the story the Sampo is lost and falls into the sea—that is why the sea is salty to this day and no doubt gold lies at the bottom of its depths. The third character is Lemminkainen who is a skilled hunter but is reckless in his actions and often is mired in difficult situations. Kullervo is the fourth, a man of tremendous strength who suffers a tragedy of the same proportions as Oedipus.

The story also contains heroines. Ilmatar is the Creatrix of the world (the primal matter to which Vainamoinen gives form through his song.) She has a counterpart, Marjatta, who appears at the end of the Runos as the mother of the one who will be the successor of Vainamoinen and the bringer of the new magic. Aino is the beautiful maiden who is the beloved of Vainamoinen but suffers a tragic fate. The daughter of Old Louhi, the witch of the North, is a complex character at times appearing as an innocent child, a shining maiden who is seated upon a rainbow, and at other times a heartless shrew. Old Louhi’s beautiful daughter becomes the wife of Illmarinen as part of a bargain for forging the Sampo. Old Louhi is the one who deceives. She is akin to the Russian Baba Yaga possessing cannibalistic tendencies, and she can change into many shapes. When Vainamoinen carries off the Sampo to give to the people of his homeland, Louhi attacks in the form of a monstrous eagle with iron talons… 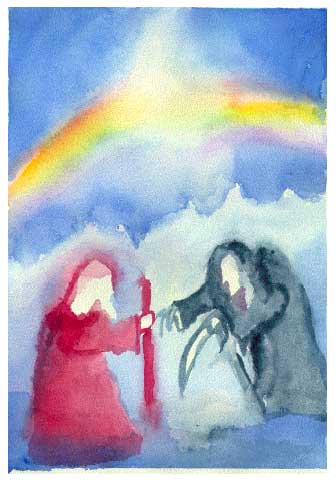 In this painting for with the fourth year student, Vainamoinen meets with Old Louhi, the witch of the north. Lost in the brilliant light of the rainbow is the jealously guarded prize, the maiden of the rainbow. Red, yellow and blue were used to paint the picture with the exception of some indigo blue for the witch. Do the upper portion of the picture first, the rainbow and sky, leaving a jagged edge of blue to form the snowy peaks in the background. Then move to the lower half of the painting. Notice how simple shapes form the bodies of the characters. See how a white shape is left unpainted to form the faces. You will need a detail brush (#4) for this last part of the painting.