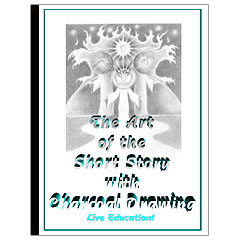 The Art of the Short Story with Charcoal Drawing

In this 3 to 4 week study the students encounter some of the greatest short stories ever written and learning from these, practice the elements of story writing such as character development, setting and atmosphere, creating a plot, foreshadowing, etc. The goal is for the student to create a short story of his/her own. Included also in this study are sequential lessons in the art of charcoal drawing. The drawings created by the student are used as an imaginative springboard for writing exercises applied to the development of the short story. This book is appropriate for grades 8 through 10. 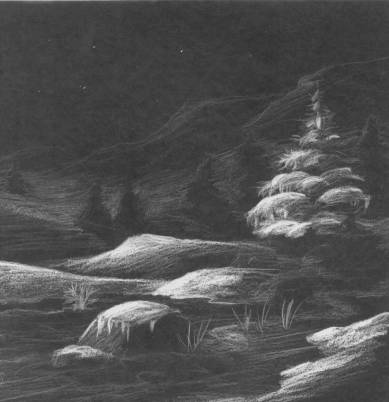 Here is a scene, drawn entirely in black and white, of a frozen and desolate landscape that the student may draw to support a story such as Jack London’s To Build a Fire. A frozen stream is seen in the foreground. I created the drawing with white lead pencil (Prismacolor white) on black paper (inexpensive black construction paper). Notice how the brightest whites are in the foreground, and the dimmest whites are in the background. Also take note of how a lightly applied white in the mid-ground creates silhouettes of triangular shaped firs. These are simply sections of untouched black paper. Notice this same principle is applied to the boulders and rocks. There is one side in the shadows that is entirely black–that is, no white has been applied, the black paper background has been incorporated into the structure of the object. A few dots with a sharpened white pencil point creates the stars in the sky.

An Example of Plot Development

The story of Leningen Versus the Ants is a prime example of the confrontation plot. In this situation, a displaced European defends his Brazilian plantation against a formidable enemy of ants. This army of insects is so vast that they cover much of the encircling horizon: “Over the range of hills, as far as the eye could see, crept a darkening hem…” This enemy knows no adversary; all other creatures and inhabitants of the surrounding countryside flee for their lives, for nothing escapes these predators: “before you can spit three times, they’ll eat a full-grown buffalo to the bones”. The burgeoning jungle foliage resembles a lifeless moonscape after the voracious army has passed through. Leningen believes that his rational and technical prowess can find a way to ward off the omnivorous hordes.

[Atmosphere of an approaching danger]

This establishes the basic conflict or confrontation. There are several elements:

A. The impending danger:
“…they’ll reach your plantation in two days at the latest.”
B. Character description, the unheeded warning and the folly of pride:
“The human brain needs only to become fully aware of its powers to conquer even the elements.” “…he had the appearance of an aging and shabby eagle.”
C. Description of the danger:
“…before you can spit three times, they’ll eat a full grown buffalo to the bones.”
D. Why the confrontation will happen

Here is where the tension of the story is intensified by a series of conflicts. The sense of danger heightens as Leningen loses ground to the approaching ants.

A. Minor Victory: The moat keeps the ants at bay
B. Minor Defeat: The ants find a way to cross the moat; Leningen and his workers retreat behind the second moat
C. Major Defeat and Imminent Death: the petrol that fuels the second moat is running out; soon the ants will overrun the plantation. All is lost (so it seems).

The plot leads to this moment of highest tension of the conflict and then shows us the resolution to the conflict established at the beginning of the story.

A. A “last ditch effort” by Leningen to save the plantation, his life, and the lives of his workers. Can he make it to the flood gate of the dam to flood the plantation before the ants eat him alive?
B. The aftermath: final words following the climax of the story

Using the plot outline of Leningen Versus the Ants as a model, begin writing an opening setting. Parallel the points established in A, B, C, D of Part I of the outline. Here is how one can use the outline to set up a similar story with an impending confrontation plot. Simply write four parallel sentences for A, B, C, D as in the example below.

Here is the situation:

Bitter cold is approaching as the sun sets on a frozen landscape. One must use one’s wits to stave off the cold and survive through the night.

A. “He knew that in two short hours the sun would be extinguished beneath the frozen hills and the lengthening glacial shadows would begin to swallow everything into a dark night of bitter and deathly cold.” (This is a description of the impending danger and the images such as “extinguished”, “swallow” and “bitter and deathly” help to create a mood or atmosphere as well. )

B. “He was a seasoned outdoorsman, but suddenly, and without warning, panic seized hold of his heart. His breath grew labored, his limbs trembled. He could feel the frigid air invading the marrow of his bones.” (This sentence parallels Leningen’s confidence and pride with an opposite emotion.)

C. “He remembered old Ben’s words from the prior evening, ‘a man can freeze into a solid block of ice before the midnight hour.’” (Do you see how this sentence parallels the sentence from Leningen: “…before you can spit three times, they’ll eat a full grown buffalo to the bones.”)

D. “Though Bud had traversed this stretch of the mountains through a dozen winters, the unexpected blizzard had obscured all recognizable landmarks.” (This sentence tells us why the conflict or situation has arisen.)

If you have completed this exercise correctly, such as in the example above, a story is already implied. Encourage the student toward careful crafting of the images in the sentences for this helps to create the story’s atmosphere. Don’t worry about originality: the same plots have been used over and over thousands of times throughout the history of literature. The example above where Bud must face a night in a frozen wasteland is very similar to Jack London’s story To Build a Fire.

For a follow-up lesson, re-read a story that you have already studied, and draw up a plot outline broken into a similar three sections: 1. Opening Setting with its initial Conflict or Crisis, 2. the series of Crises, Oppositions or Confrontations that gear up the tension of the story, and 3. finally the High Point or Climax with its Resolve. Spell out the subcategories to each of these sections with examples from the story. For example, a character flaw (character description) might be revealed in the second section when a series of events cause the tension of the initial conflict to increase.

Write two or three paragraph plot outlines for several of the plots described in the list of plot types.

Describe how the plot is delayed in its fulfillment through Opposition and Tension in some of the stories.

Describe the essential conflict that creates the plot in some of the stories from your readings.

Included in the this book are lessons for teaching charcoal drawing