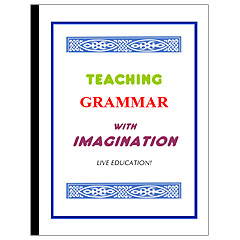 In the fourth grade year we introduce the student to the eight basic parts of speech such as nouns, pronouns, prepositions, adverbs, etc. this is accomplished in an imaginative way and within the context of the fourth year story material. For example, the student can develop a facility in using prepositional phrases in descriptions from Norse mythology: “… over the hills of Midgard,… through the deep forest… under the Rainbow Bridge… into the halls of Asgard,…”, etc.

An Exercise with Adjectives

The following poem is found at the end of the Man and Animal book. It is rich with adjectives and is also written by one of the finest poets in the English language. First learn the poem with the student before entering into this written exercise.

Glory be to God for dappled things—
For skies of couple-color as a brinded cow;
For rose-moles all in stipple upon trout that swim;
Fresh-firecoal chestnut-falls; finches’ wings;
Landscape plotted and pieced–fold, fallow, and plough;
And all trades, their gear and tackle and trim.

All things counter, original, spare, strange;
Whatever is fickle, freckled (who knows how?)
With swift, slow; sweet, sour; adazzle, dim;
He fathers-forth whose beauty is past change:
Praise Him.

You can use other poems or passages of writing from Beowulf or Norse Myths for this exercise—this poem is here for an example of how to proceed. You can also create some exercises for the student based on this model that will help him to discriminate among other parts of speech. But here we will concentrate on the describing words (adjectives).

There are some unusual words and “coined” terms that Hopkins has used in this example. Consider this to be literary enrichment as well. The student can write this poem into his book and then color green around all the describing words. You will have to help him find all of them.

Now have the student write new nouns to the same adjectives,

and borrow a few of Hopkin’s images such as couple-colored skies, to write his own short prose passages with poetic imagery:

Many variations could be created from the above exercise.