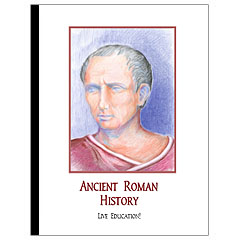 The traditional founding of Rome by the first king Romulus began in 747 BC. This survey of Roman history covers the first seven kings of Rome, followed by the development of the Roman Republic, finally leading into the time of the Caesars of the Roman Empire. Many aspects of Roman culture are studied including engineering, architecture, Roman law, the rise of Christianity, and the influence of the Latin language upon our modern-day English.

Lesson 9: Tullus Hostilius the Third King
The Horatii and the Curiatii

During the reign of Numa Pompilius, Rome was at peace. The new king, Tullus Hostilius thought that the Romans had grown complacent and were in danger of being weakened, so “he looked all round for a pretext for getting up a war.” At this time in Roman history, only the surrounding countryside was controlled by the city. It was not until later history, the time of the Republic, that the entire Italian Peninsula was governed by Rome.

The nearby Alba Longans—the clan who had welcomed Aeneas from Troy—were charged with plundering Roman cattle from the open pastures. Tullus demanded redress, but when the Albans refused, the battle lines were drawn. The two leaders came to a compromise however, the best three warriors from each side would battle to settle the dispute. The Romans sent the Horatii; the Albans, the Curiatii. One Horatii survived the fight. When he returned to Rome triumphant, his sister who was secretly betrothed to one of the Curiatii, wailed at the death of the vanquished. Her brother, drunk with victory, slew her. For this horrible deed it was the custom that he be executed.

Tullus was not appeased and found other reasons to war with the Albans. Soon the entirety of the land and population was incorporated into Rome. Rome doubled in size. All of the city of Alba Longa was leveled. During his reign, religious observances were neglected. The King decided to perform a sacred rite instituted by Numa lest the neglected gods be offended. However, legend tells us that he performed the rite incompetently since he had not practiced it for many years, and his palace was struck by lightning killing the king.

Following this short description of Tullus, the teacher should turn to the presentation from the source book. This can be followed with the short Writing/Dictation exercise. Discuss the trial of Horatius following the slaying of his sister. Was the trial just? Could the events have been set up differently? An appropriate picture would be Horatius preparing for the fight with his sister begging him not to engage in it —-see the example. The picture is somewhat ironic in that it depicts the sister of Horatius imploring him not to do battle with the Curiatii. As the story goes, Horatius was victorious, and not being able to bear the remorse of his sister over the fallen enemy whom she secretly loved, slew her in a fit of anger. Also discuss the treachery of Mettius (from the source book).

Tullus further increased the size of the new city by promoting warfare on neighboring tribes. The conquered peoples then became part of the Roman city. Religious rites were forgotten and Rome knew no peace. Jupiter’s anger was aroused; Tullus perished by a stroke of lightning. 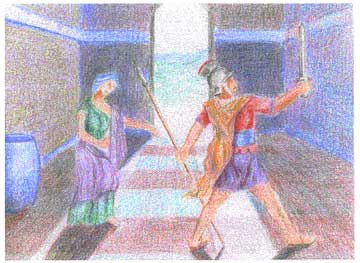