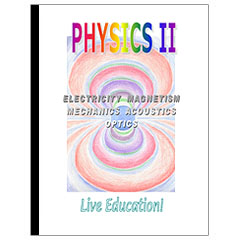 This study builds upon the investigation of simple physics phenomena from the previous grade (Heat, Light, and Sound). Now we investigate electricity and magnetism, mechanics, acoustics, and optics. The approach is phenomenological, but the student will be led to learn some of the fundamental laws of physics such as the mathematical ratios of musical intervals, magnification and refraction, the electrical circuit, and the mechanical advantage of simple machines.

We have a preliminary definition of work as the vertical movement of a load, and we express it with a notation in foot-pounds. However, one never hears of a car with an engine that generates 5000 ft. lbs., one usually hears of the horsepower associated with an engine. Obviously the engine is involved in expending an effort to move a load, so what is the relationship between work and horsepower? Most students want to know if a car with a 550 horsepower engine can do the same amount of work as 550 horses. A small economy car may have 150 to 200 horsepower engine, but it is quite a stretch of the imagination to think that the little car could replace the efforts of 150 to 200 horses.

When we compare our definition of work with horsepower, we are introducing another variable into the equation–that of time. We lift a weight vertically over a certain distance to gain the idea of work, but now we measure how long it takes to lift that weight over the same distance to arrive at a definition of power.

The definition of a measure of horsepower was a convention that was arrived at by James Watt. It was an era where steam power was beginning to be used to drive ships, trains, and entire mills and factories. Steam tractors were slowly replacing the team of horses to pull the plows. With a standard definition of the power of a horse, one could measure the amount of power accomplished by the new engines.

The Power of One Horse or ONE HORSEPOWER became defined as: 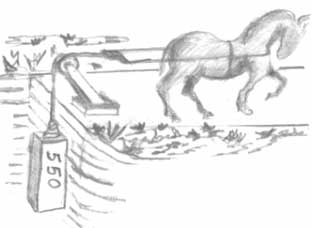 The power needed to raise 550 lbs. one vertical foot in one second.

We could restate this as:
550 ft. lbs. of work accomplished in one second.

If we multiply by 60 we get horsepower in terms of one minute:
ONE HORSEPOWER = 33,000 ft.lbs of work per minute

Now we can discover how much horsepower a student can produce. Knowing the basic principle of measure for horsepower, will allow the teacher to devise several scenarios to measure the student’s horsepower. Two examples follow.

The teacher should find a long driveway or slope and have the student run to the top while timing the accomplishment of this task. Then we can measure the horsepower.

Let us say that a long driveway gains 30 vertical feet from the top to the bottom [note: this is not the length of the driveway but the difference in altitude from top to bottom]. A 120 lb. student can run to the top in 10 seconds. How much horsepower was expended to do this?

To calculate, we first find the amount of work, which is the student’s weight multiplied by the vertical gain in feet.

Here is the formula:

Another possibility would be climbing stairs. Let us say that another 120 lb. student can climb to the top of a flight of stairs in 24 seconds. The vertical gain from top to bottom is 47 feet. Then using our formula we have: 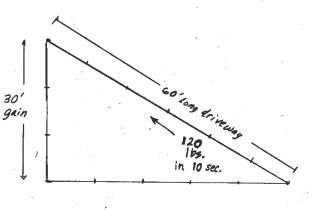 The student can draw the picture of the horse pulling the 550 lb. weight into his main lesson book, and beside this the formal definition of horsepower.

On the next page he can draw a right triangle that describes the driveway or stairs that he climbed. This should be drawn to scale. Use graph paper pasted into his lesson book if needed. Label this as in the accompanying illustration. He should write formula into his book. Now have the student make the calculations for horsepower and show these results for different values of time or weight.

The student can now devise some other experiments for testing horsepower by timing some form of work and then making the calculations. Here is an example. A student lifts a heavy object 3 feet vertically as many times as possible in one minute. Let us say that it is a 10 lb. wt. lifted 3 ft. vertically 100 times in one minute. In this case we multiply 10 lbs. times 100 repetitions times 3 ft. to get 3000 ft. lbs. of work, and we divide that by 33000 [refer to the definition of horse power by the minute to see why we use this number].

The answer is .09 horsepower

In climbing the stairs or running up the driveway we have made use of the simple machine known as the inclined plane. Imagine in our scenario above that the same 120 lb. student climbed a 30 ft. vertical ladder in 10 seconds. How much horsepower does this scenario represent? Can you see that it is exactly the same? To reiterate an earlier point, what is the difference between the two? The effort! —half as much effort is needed to climb the inclined plane to accomplish the same amount of work.

The Mechanics of Simple Machines