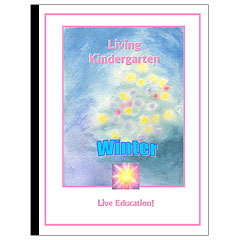 The many activities included in the kindergarten winter book include circle games, finger knitting, sewing, and dollmaking, and candle dipping. One will also find stories, songs, and celebratory activities for Christmas, Candlemas, Los Posadas and Hanukkah.

Saint Nicholas, or Father Christmas as he is known in England, is described by a seventeenth century writer as that “old, old, very old graybearded gentleman called Christmas, who was wont to be a very familiar guest and visit all sorts of people both rich and poor.” (Odin, as Rig the Walker, does the same, accompanied by Loki.) The most beloved saint of Holland, Saint Nicholas appears each December 6th. He is a tall, gaunt, and impressive old man in a blue cloak and bishop’s mitre, and is usually accompanied by a rascally dark fellow named Black Pete. In one hand he carries his staff and in the other a book. This book has gold pages and black ones, on which are inscribed the good and evil deeds of each child. Black Peter, also known as Ruprecht, carries a sack of gifts—and a rough switch or broom. Each child is called by name, and is dumbstruck to hear Saint Nicholas tell him that he knows that he has pinched his baby sister when no one was looking, and that the prayer he says each night for his parakeet is heard.

Saint Nicholas has his feast day on December 6th, during the first week of Advent; and by this date we may understand how he came to embody such archaic powers. Advent means “solemn coming.” It is a time when we become conscious of the past deeds of ourselves and the earth, and how these deeds work on into the future. This “coming” can be understood as the spiritual evolution of man and the world. We kindle our will by reflecting on how our deeds prepare the way for the one who is to come. Saint Nicholas transforms the straw left in shoes or stockings by door or hearth into sweet things. Shoes make our footsteps, and are the embodiment of our will. The gifts at this time of year hold a promise, and often have the quality of a magical charm: money that you may prosper, sweets that your life may be likewise. At the winter solstice we have the promise of spring; the seed promises the fruit; the child promises the adult of the future; the light shines in the darkness and the darkness has not encompassed it. Saint Nicholas, the all-seeing, the compassionate, the judge, the gift bringer, the ‘old, old, very old man,’ precedes and promises the coming of that giver of the greatest of all gifts, that most loving and compassionate of judges, the newborn Christ Child.

Christmastide gifts are unlike gifts at any other time of year, in that the bringer of the gift is in some way obscure, magical, other-worldly. The gifts may be left at night while we sleep or by day with fanfare and panoply, but be the bringer Saint Nicholas, Knecht Rupprecht, Saint Lucia, Baboushka, the Three Kings, or the Christ Child Himself, the gift bringer has the capacity to appear in person simultaneously in households the world over. He may come from heaven, the North Pole, or a far distant country whence he must travel by horse or reindeer. He is often associated with fire, either descending a chimney or leaving his gifts by the hearth.

In his more ancient, mythical form he has a double nature, coming both to delight and to chastise. Like the ancient gods from whom he is descended, he can read hearts and he knows our hidden thoughts. Santa Claus (you better watch out), with his sleigh and eight reindeer might be none other than Odin himself coursing the midwinter heavens on his mighty eight-legged steed, Sleipnir, dispensing reward or punishment. And older still than that Norse All-father, there is the echo of the even earlier renewal festival of the winter solstice and the quickening earth. Ancient Romans called this the Dies Natalis Invicti Solis, the Birthday of the Unconquered Sun. But when Christianity drove out the old gods, the gift bringer reappeared as Saint Nicholas, a fourth century bishop of Myra in Asia Minor. This Saint Nicholas eventually became the patron saint of children.

Very little is known of the historical Saint Nicholas. He was a wealthy man, widely known in his day for his generosity and his great love of children. Legend has it that in a period of famine a wicked innkeeper murdered and dismembered three schoolboys, pickling them in brine that he might have food to serve his guests. Saint Nicholas found the boys thus; he blessed them as they lay in the vat and the boys were at once restored to life and limb.

Another legend tells of a poor man who had not the means either to sustain his three daughters or to dower them for marriage. In desperation he resolved to sell them to a life of sin. Upon learning of this, Saint Nicholas on each of three successive nights threw a bag of gold in through the window of the poor man’s house—enough to dower, or redeem, each daughter. These three round bags of gold are the origin of the three gold balls that hang before the shops of pawnbrokers, of whom he is also the patron saint.

Arrange for St. Nicholas and his mischievous helper Ruprecht (or Black Peter) to visit your home school. This takes some preparation, but it can be well worth the effort. Choose someone very tall from your community of friends to play the part of St. Nicholas. They should be in costume—a long red or blue cape with a tall hat to match and a white beard. It is best if the children do not recognize the actor as someone they know. Ruprecht would be dressed in dark clothes with his face covered in soot—you can use burnt cork for this.

Prepare a sack with a present for each child such as apples, nuts, and honey cakes. Also in the sack is a scroll or booklet with each child’s name and a verse (written by you) saying something about the child. This is a time to give praise and also to remind the child of some aspect of their personal work. Just at circle time there is a loud knock at the door. When you open the door you find the sack. The figures of St. Nicholas and Ruprecht can be seen slowly walking away. It would be in character for Ruprecht to throw some coal into the room before leaving or to perform some other mischievous antics.

One more enhancement of this experience is to have something especially made in the sac for each child. A golden walnut shell emptied of its nut and filled with a tiny silk fairy is an enchanting gift. Once you begin this ritual in your home your children of all ages will look forward to it year after year.

To help young and old experience the holiday spirit, and to help in the daily transition from Advent to Christmas, the game of Kris Kringle provides a wonderful means of sharing with others in special ways.

In this game the name of each family member (or any group of close friends) is written on a slip of paper and placed in a basket. After an Advent evening of stories and song, each member draws a name from the basket. Every day a kind deed is secretly done for the person whose name has been drawn. Some people play that secret Kris Kringles leave a little handmade gift for the person whose name they drew. On Christmas Eve each person tries to guess who his or her Kris Kringle has been. 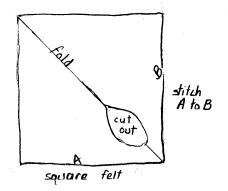 Use this pattern as a guide, enlarging and making it smaller as you wish, cut gnomes out of the felt. The children can choose the felt color and a color of embroidery floss. Thread the needle for them and have them sew a running stitch along side A matched to side B.

Now choose a color of wool roving and roll a small log shape to stuff into the hat that extends to the bottom of the gnome. The children will want to make many of these for the tree and as gifts. A variety of sizes and colors make playful and magical ornaments. You can also make these for the toy shelf. 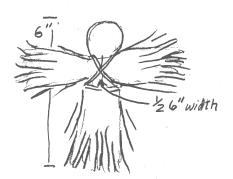 Cut two pieces of wool roving each about 6 inches long. Fold one piece in half to find center and place it horizontal over the vertical piece. Tie an 18-inch piece of thread around the roving about ¼ of the way down from the top. Crisscross the thread in front of the roving and tie it around the back. Now fluff out the wings from the roving that was placed around the top and fluff out the dress from the roving beneath the crisscross. These angels can be made in any color or size; the suggestion of 6 inches was just to get you started. Children may need help with the tying. Allow them to do as much as they can by themselves. You can embellish the angels with tiny gold stars sewn around the top of the head or sew more golden thread through some of the wool that is over the head to form a crown or halo. Run a length of thread up through the top of the head to hang the angel.