Lessons in the Arts for the Elementary School Years

This book is designed to show the teacher the “how to” of crayon drawing and watercolor painting in teaching the young child. The information in this book is useful for grades one through four.

Beginning with the Primal Colors of Yellow and Blue

To understand why yellow and blue are the primal colors we will have to jump ahead to the physics studies of color that are usually presented to the 6 th year student. The young student will create many paintings with these two colors; we will indicate a few ideas in the pages that follow. Typically, in a Waldorf school, the teacher will present the yellow blue theme more than a dozen times in the first year; this theme can comprise much of the first year’s painting lessons.

In the introduction to physics, the students learn to distinguish between Newton’s theory of color and Goethe’s theory of color. Newton believed that color is derived from pure light, whereas Goethe demonstrated the color comes into being through the interplay of light and darkness. Newton’s demonstration was performed in a darkened chamber where a beam of light was allowed to pass through a prism. He concluded that light forms color, but did not take into account the surrounding darkness of his chamber. Goethe embarked on a 20-year investigation of color and showed how color was generated through the workings of light and darkness. The students learn of the two primal colors through two experiments. The first involves a bright light source such as a projector in which successive layers of tissue or gauze are placed between the shining light and the eye of the beholder. As the layers become successively thick, the light not only becomes dimmer but also slowly yellows. When more layers are added, the light source becomes orange. More layers cause the light to become red. The second experiment involves an aquarium full of water. A light source is allowed to shine through the water from one end while the observer looks through the water at the side. The side opposite to the observer has been darkened with black paper. When a bit of soapy water is added to the clear water and allowed to swirl around, a subtle blue color comes into being.

The first experiment imitates the movement of the sun across the sky. At high noon it is blazing light to bright to look at, and due to the steep angle, its light passes through the least amount of atmosphere to the eye. But in the late afternoon as the sun nears the horizon, the angle to the eye is less steep, so the light must pass through more miles of atmosphere before reaching the eye. The first primal color comes into being, yellow. When the sun is on the horizon and the light is passing through more layers of atmosphere, the yellow intensifies to orange until it becomes red at the lowest point.

The second experiment imitates looking through the light filled atmosphere into the darkness of space beyond. When soap was added to the water, it became a turbid medium like the atmosphere of the earth. We look through this turbid medium that has light scattered throughout and the depths of infinite darkness behind it and we see the other primal color come into being —the blue sky. If we were to intensify this blue in a manner similar to how yellow was intensified to orange then red, we would get a range of violets approaching red.

When we look up and see a yellow sun in the blue sky, we are seeing the archetypal phenomenon of how color arises in our world. Of course, the preceding explanation is greatly simplified and merely touches on GoetheÂ¹s twenty-year study. But the point was to at least hint at the importance of devoting many lessons to the study of the yellow/blue theme with the young student.

Notice, in the following painting, how the yellow is strong in its center and then becomes fainter as it approaches the periphery. Blue, on the other hand, tends to deepen its hue on the periphery and becomes fainter as it approaches the center. Thus we have two contrasting movements in color. Begin with the yellow by creating a strong center and allowing the color to feather out toward the periphery. With each new application of paint continue this movement from center to periphery. The color can be personified as a character that puts herself forward with a great splash of enthusiasm but whose light tends to fade when repeated efforts are needed. 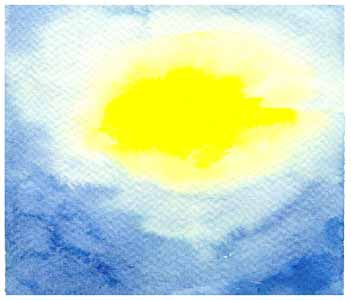