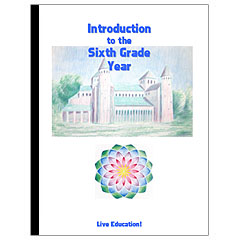 Introduction to the Sixth Grade Year

This overview book provides the teacher with the daily schedule as well as the block rotation for the entire year. There is a section devoted to understanding the adolescent years that the student is now entering, as well as reading lists for independent study and lists of the supplies needed for teaching sixth-grade.

First Semester
September to the end of January

Math for the 6th Grade

The math for 6th grade (ratios, percents, continued work with decimals, area and perimeter formulas, etc.) can be presented in a late morning after main lesson practice period two or three times weekly through the entire year.

Available to order online at keypress.com

Geography in a Historical Context

In the fifth grade a formal survey of the cultural and environmental regions of the North American continent was introduced—geography was treated as a subject unto itself. But when we look at the study of ancient civilizations, India, Persia, Mesopotamia, Egypt and Greece that were also studied in fifth grade, then we gain a sense of wider view of geography intimately connected with history. The student gained a geographical imagination of the civilizations of the Mediterranean and the Fertile Crescent.

In this sixth grade year, within the context of teaching ancient Greek history, Roman history and the Middle Ages, the student will gain familiarity with all of Eurasia, for the empire of Alexander moved eastward from Greece through Egypt, Persia, Mesopotamia, all the way to the Indus Valley in India; whereas the Roman Empire spread westward from Rome through what is now France and Spain, all the way to Great Britain. Then, in the later centuries of the Middle Ages, the Mongols, native to the steppes in a huge region north of China advanced from the far East into the interior of Europe and southward into China, Southeast Asia, and India. When studying the Middle Ages, we must also survey the Islamic expansion throughout the Middle East, westward across northern Africa and then northward into Spain. A relief map of Eurasia will be indispensible for teaching these blocks. In the sixth grade, the study of history is also the study of geography.

But we must also consider the study of the plants in fifth grade, and the study of mineralogy in sixth grade. In this case a world map will allow one to point out regions of chalk and limestone deposits (the White Cliffs of Dover, the Juras) or granitic ranges (the Alps, Himalayas, etc.), the zones of forests that encircle the entire earth, jungle regions, arid deserts, etc.