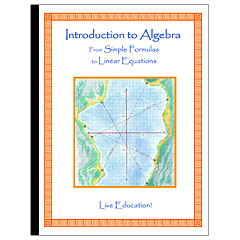 This approach to the teaching of this subject incorporates visual analogs for the understanding of beginning algebraic concepts. For example, negative numbers are seen as “below zero” on the thermometer, combining like terms operations are depicted as sorting similar products on store shelves, linear equations are seen as sea routes and avenues of transport between islands on a mythical land overlaid with an XY grid of Cartesian coordinates.

In the study of perspective drawing, (Live Education, Perspective Drawing) we learned that a powerful tool was created through the implementation of the grid. It not only allowed for an exact representation of three-dimensional space on a flat surface, but could also be extended to map projections and the charting of the earth through latitude and longitude lines. This opened the doors for extensive navigation and exploration, for accurate maps could be made that would allow another sea voyager to find their way to the same exact place discovered by the explorer.

In this exercise the student can gain a sense of the accuracy given by the grid, learn an important algebraic idea, and have fun giving rein to his or her imaginative creativity. Notice that a horizontal and vertical cross (known as the x axis and the y axis) divide the map into four quadrants. If the y axis points north and south, and the x axis, east and west, then the four quadrants could be called NE, NW, SE, and SW. Notice also that each axis is numbered positive and negative. By setting up the grid in this fashion, one can exactly represent every point upon the surface. This is an important idea to grasp: that one point upon the surface of the plane, and one unique point only, can be represented by a pair of numbers (coordinates). There is no other point on the plane surface that contains an infinite number of points that can be represented by a given pair of coordinates; those coordinates represent a unique point among an infinity of points.

Look at the largest and southernmost island and find the large bay in the SE quadrant. There is a point designated as (5, -8). Let us imagine this to be the location of a large city. If we look above at the number line on the x axis we see that this point lines up vertically with the number 5, and then, looking to the y axis we can see that it also lines up horizontally with -8. Thus we can designate any point on the map in a similar way (x,y). The first number of the pair will always designate where the point lines up with the x axis, and the second number will designate where the point lines up with the y axis.

These numbers are called Cartesian coordinates from the name of the French philosopher and mathematician Rene Descartes. One morning, as he lay in bed musing upon ideas, he noticed a fly crawling in various directions upon the ceiling. It traveled in a straight line in one direction, then traveled in a straight line in another direction. As he watched the traversals of the fly a pattern of zig-zag lines and arcs could be mentally drawn on the ceiling tracing the insect’s path. Then he pondered how one might represent the path by numbers. Thus there emerged from his ruminations the coordinate system that bears his name, and, as we shall see in the next lessons, also a system for representing the linear directions of the fly’s path. Descartes developed a way to put algebra together with geometry (analytic geometry).

Here’s the fun part. The student can create his or her own map in the main lesson book similar to the one given in the example. It is a mythical land, perhaps with a geographical terrain similar to C. S. Lewis’s Narnia, or it could be a section of illustration such as the Greek islands inspired by the world atlas. One might imagine a main body of land and several islands surrounded by ocean. After creating the x,y grid with the coordinates (0,0) at the center of the page, put in mountains, rivers, lakes, bays, inlets, peninsulas, regions of forest, desert, farmlands, jungles, lowlands, etc. Choose colors for the different regions, such as light green for farmlands, dark greens for forest or jungle, orange for desert, etc. Name the islands, the land, the ocean, seaways, rivers, mountain peaks, etc. Put in cities naming them also.

On an adjoining page of the main lesson book, the student can list the cities the rivers, bays, deserts, mountain peaks, etc. Then the student must find and list the exact coordinates of each of these.