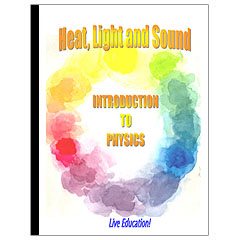 This teacher manual introduces the student to the first physics principles within the realm of acoustics, light, and warmth. It is cast into a phenomenological approach, where one witnesses simple phenomena in physics without the prejudice of a preformed hypothesis. Did you know that light is invisible? The seventh grade book, Physics II, builds upon these beginning observations and furthers the study into optics, magnetism, electricity, and the mechanics of simple machines.

How Color Comes into Being

Lesson 6 How Color Comes into Being

In the introduction to light and shadow I have already given some indication about the difference between Goethe’s and Newton’s understanding of color. Goethe saw that darkness was an active participant in the generation of color; Newton thought that light alone was the source. It is important to realize that Newton was motivated to find mathematical law in his exploration of physics, whereas Goethe sought for what he called the “archetypal phenomena,” that is, the few phenomena of color that would explain the multitude of all other instances of color phenomena. Notice the difference. Goethe was not satisfied to find a “principle” or theory that would explain all the many manifestations of color that occur in the world. Rather, he wanted to find a manifestation of color that would be the “key” to understanding all color—he didn’t want words or formulas but an actual sense phenomena that he could see with his own eyes. Ironically, the scientist usually demands empirical evidence in his everyday world but finds satisfaction in the pursuit of his science in the intangible abstraction of a theory. Here, the poet/ scientist who dwells in the world of metaphor and symbol is demanding satisfaction in the pursuit of his science from hard empirical evidence–in plain sight to all.

The archetypal phenomena are the examples found in nature, where ideal reality (in this case, the ideal of color) are manifested to the highest degree in the sense world. These manifested instances of the ideal, Goethe called “nature’s open secrets.” In color, the open secret that tells us the story of how color comes into being surrounds us on all sides. The laws of the chromatics are found in the blue sky around us and in the rising and setting of the sun. It is the nature of the intellect to analyze infinitely. Thus we may come to behold the archetype and wisely find satisfaction in the manifested ideal, but the intellect will want to continue to fragment the phenomenon as it pursues its course of analytical compulsion. If the intellect comes face to face with the truth, it may recognize the value of the experience only briefly but then in its restlessness pushes on to further dissection. Modern physics investigations of light and color have pursued this path to the microscopic limit where smaller and smaller physical existents are so minuscule that their behavior is extremely difficult to predict. 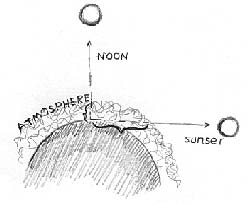 In this experiment, we will simulate the arising of color as the blue of sky. What Goethe saw in the prism–that color comes into being through the polarity of light and darkness– is manifested in the heavens above. When we gaze into the sky above us, we look through the light-filled atmosphere of the earth into the darkness of the depths of space behind. From this original phenomenon, the color blue arises in various shades depending on the turbidity of the atmosphere. For example, at a higher elevation such as in an airplane or a balloon, there will be a thinner mantle of light-filled atmosphere that one will look through into the darkness of space, and the blue will be deeper approaching violet. Similarly, when we gaze directly at a light source such as the sun the white light will gradually become yellowed as the thickness of the turbid medium (in this case, the atmosphere) is increased. As the sun settles lower in the sky, there is a far thicker blanket of atmosphere that the light has to pass through before the light reaches our eyes than when it is directly overhead and consequently, the first color arises–yellow. As the sun nears the horizon the light passes through more layers of atmosphere, yellow turns to orange and eventually to red. This is evident in the diagram which shows that the observer must look through almost three times the distance of atmosphere at the setting sun compared to the sun at high noon. Goethe called this process “intensification” or “heightening”. As the experiment will demonstrate, the first instances of color coming into being are in the two colors yellow and blue.

A fish tank or clear container of water is set up in a manner similar to the illustration above. The room should be darkened. A black paper is taped behind the tank. This will be the darkness of space behind the atmosphere and the water will represent the medium formed by the atmosphere of the earth. A light from a projector or a focused light source is allowed to pass through the water from one side. This light source will represent the sun. We will make the water turbid by adding some soapy water little by little until we see the two primal colors arise. Sometimes this is best viewed from above. The blue is often seen from the side where one looks through the tank at the dark paper on the other side. The yellow is also seen looking through the tank from the opposite side of the light source. I have done this experiment with some adults including teachers, who could not see the color –it is somewhat subtle. What I discovered, was that the adults had no previous experience of colored light that was not attached to a surface –unless it was a brilliant sunset. This color is floating freely in the swimming light. With some patience and repetition, they came to see the color. I mention this in case you think that you are not doing the experiment correctly. In one case a teacher called me into her room to show me that the experiment wasn’t working. I immediately saw the color and pointed to it. With this assurance, she looked more carefully and began to see the color for herself.

6 b. Now we will simulate the sunset. In the previous illustration notice that the observer must gaze through more layers of atmosphere at the setting sun than at the noon sun. At noon the sun appears flaming white, but as the layers of atmosphere increase, the color yellow appears followed by orange and finally red. When the sun is fully red and it looks to the eye that it is touching the horizon, in reality, it has already set below the horizon. The atmosphere is refracting the light, bending it around the curve of the earth to the eye of the observer.

In this experiment we will add layers of white tissue paper one by one in front of the bright light of the projector. The first few tissues don’t seem to create any color; they only soften the light. But as we continue to add layer upon layer, the light grows dimmer, but slowly takes on a yellowish tinge. Depending upon the brightness of the bulb, we can add many more layers until we reach a dull orange glow. Usually at this point the layers are getting so thick that the light source is nearly obscured, so it is difficult to get to the red stage.

Following this demonstration, student and teacher can observe the sunset or sunrise together. This can be followed with an exact depiction in watercolor of the color of the sunset sun, perhaps a three part painting showing the stages. These could then be inserted into the lesson book.

Introduction to Light and Shadow