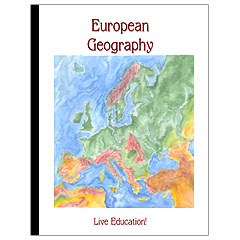 The student is introduced to the geographical features of the European continent — its rivers, mountains, and seas, as well as the flora and fauna of the diverse terrain. Most important to this study is a portrait of the diversity of the people and their way of life who inhabit the various countries that comprise the nations of Europe.

Land of 188,000 lakes, Finland is more lake than land in its southern regions. It has more lakes than any country in the world. Sculpted by a continental glacier in the last Ice Age, the lake basins lie typically in a northwest-southeast direction. Where the glacier stopped can easily be seen on a map of Finland. Left on its rim is the Salpausselkä Ridge, just south of the Lake District. In this region, which covers almost one third of the country, many rivers flow toward the Baltic Sea. Before roads were built here, the lakes and rivers were the principal means of transportation connecting towns and villages. Today, there are still passenger ships to travel by.

Finland lost a lot of weight from on top of her with the disappearance of the continental glacier. Ever since then, the land mass has been rising at a rapid pace. It has risen 12 inches in the last 100 years along the Gulf of Finland and 36 inches over that time along the Gulf of Bothnia! Its total land mass increases by about 2.7 sq. mi. (7 sq. km) each year!

The southern part of the country is primarily a rural landscape of gently rolling hills. In the north are more hills, covered by the boreal forests that extend around the globe. This is the “Land of the Midnight Sun,” where the sun does not set for 70 days, beginning in mid-May. After a 50-day period of sunsets, there is a nearly six-month long period of darkness in the winter. It’s during the dark time of year that one can most easily see the “Northern Lights” — Aurora Borealis — a frequent display of shimmering veils of light.

Two thirds of Finland is forested. Offshore in the southwest lies an archipelago of 17,000 tree-covered islands and skerries — a yachtsman’s paradise. Farthest away are the Åland Islands, which have been largely autonomous from Finland since 1920.

Helsinki, the modern day capital, and Turku, the former capital, both lie on the southwestern coast of Finland. Turku has an impressive medieval castle and cathedral. Helsinki (pop. 500,000) has a flavor which is both Swedish and Russian. It has been compared to St. Petersburg, and has such a similarity to it that several American movies whose setting was in Russia were filmed in Helsinki.

The ancestors of Finland’s people, of a different ethnic stock than the rest of Scandinavia, are believed to have migrated long ago from central Asia. The Finnish language is somewhat related to Hungarian but, not being an Indo-European language, it is unlike any other in Europe. It has more vowels than consonants! Since Finland was for a six-hundred year period (1200-1809) under Swedish rule, the Swedish language is still taught at school, and street signs in Helsinki are also printed in Swedish. Finns are bilingual, though 93% of Finns speak Finnish as their first language, versus only 6% Swedish. Gypsies, the largest ethnic minority, have their own language, as do the Sami, or Laplanders, in the far north of the country.

Today, there areonly appr. 2000 pure-bred Sami left. Their customs are still centered around their nomadic lifestyle, as they follow great reindeer herds across the northern realms of Russia, Finland, Sweden, and Norway — irrespective of national boundaries. The kota, their traditional dwelling, looks similar to a Native American tee-pee.

From 1809 until 1917, Finland was under Russian rule as an autonomous “Grand Duchy.” As the Finns began to drift away from Russian dominance in the early 20th century, the Russians clamped down on the Finns. As an example of the Finns doing things their way, Finland was the first country in Europe to extend the right to vote to women, in the early 1900’s. With the advent of the Russian Revolution, the Finns saw their opportunity to break away from Russia. The civil war that followed in Finland led to the creation of its constitution in 1919.

Finland has a thriving ship building industry — especially ice-breakers. More than one half of the world’s icebreakers are produced there. Icebreakers stay busy during the long Finnish winters in order to keep shipping lanes open in the Gulf of Bothnia and Gulf of Finland, which can freeze over completely in severe winters. A magnificent tourist activity is afforded passengers on icebreakers from December to May in the northern Gulf of Bothnia, the site of Europe’s largest continuous ice field.

In former, less prosperous times, many Finns emigrated to Sweden — even more to the US — most of them settling in the Upper Peninsula of Michigan, in northern Wisconsin and in Minnesota.

The Finns have one of the highest literacy rates in the world. Reading is a favorite pastime. Finland has many writers, and about one half of them are women. Scandinavians drink a lot of coffee — and not just when they’re reading — but The Finns drink more per capita than anyone else in the world.

The Orthodox Church (from Russia) is the 2nd largest church in Finland, after the Protestant Lutheran Church.

The Finns have exploited their vast forests — a source of pulp. Finland is, after Canada, the world’s 2nd largest exporter of paper and cardboard products. Acid rain, a result of air pollution farther south in Europe, is becoming an increasing problem to the timber industry, with large areas affected.

Finland is renown for its telecommunications network and industry. NOKIA is Finland’s gift to cell phone users all over the world.

Throughout the year, Finns love to recreate in the out-of-doors. Famous as cross-country skiers, Finns flock to mass skiing events which are held each weekend in winter time. Each year, more than 10,000 skiing enthusiasts participate in the 47-mi. (75km) Finlandia Skiing Marathon.

Speaking of Finlandia, Jean Sibelius is Finland’s most well-known composer, and Finlandia is his most famous composition.

A great tradition of folk poems, called runes, still lives on in Finland. The runes are sung, rather than spoken. Rune singers accompany themselves on the kantele, an ancient, harp-like instrument. Traditionally, men sing the epic poems (such as the Kalevala), while women sing lyric poems. The craft of rune singing is passed down from parent to child.

The Kalevala is Finland’s national epic. It is customary for a pair of men who sit, straddling a log or bench, to sing the Kalevala. They hold hands at arm’s length and rock back and forth as they sing in rhythmic fashion and tell the story. The Kalevala is a compilation of ancient epic poems, assembled by Elias Lönnrot, who lived from 1802 to 1884. He worked several years to “finish” it (pardon the pun). The 50-canto work was published in 1849. Before that, the Kalevala was handed down only in oral form. Much of it was collected from rune singers in Karelia, in southeast Finland, where rune singing is still practiced today.

Think “Finland,” and the first thing most people think of is the sauna. In olden times, the sauna was traditionally a bath-house. In the forests, where many people lived, they had a separate log cabin where a fire was kept going. There they could relax and wash themselves. Babies were born inside the sauna, since it was the only warm place. Before houses had running water for showers or baths, weekly trips to the sauna was the usual method of bathing.

Using the description in the lesson on Denmark, make and serve a meal of Danish open-face sandwiches. Spilt pea soup, served with “flatbread,” is a good first course. In addition to slices of your favorite cheeses, suggested toppings/garnishes include: liver spread w/slices of sweet pickles; slices of hard-boiled egg or scrambled eggs w/fresh parsley; thin-sliced ham or roast beef w/ thin cucumber slices. Make sure everyone at the table follows proper smørrebrød etiquette.

It’s still very much a custom for families and friends to relax in the sauna. Now, as much as ever, it’s a social ritual. Many homes have a private sauna. Every apartment complex has them. Vacation homes usually have, as in olden times, a separate house for the sauna. Inside, sauna-goers use bundles of birch twigs with which to hit each other, in order to invigorate the skin and blood circulation. Birch leaves are used instead of soap — with the same effect. Food, or at least coffee, is served. Salty dishes are preferred, in order to replenish salt lost through perspiration. Of course, one takes a quick dip in the lake (or pool) or rolls in the snow between trips to the sauna. Ah-h-h! If you know someone with a Finnish style sauna, politely invite yourself over! Offer to bring a dish of food and the bundle of birch twigs.

Read excerpts from the Kalevala, Finland’s national epic (Land of Heroes — a Retelling of the Kalevala, by Ursula Synge, published by Atheneum Press, is a good student version to read). Write a description of one or more of the heroes or heroines in the main lesson book. Illustrate the narrative either with a drawing or water color painting.