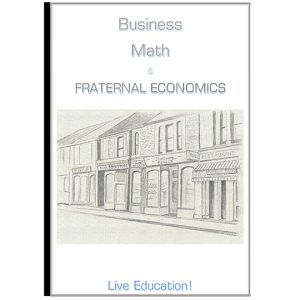 In the exercises found in this book, we have real life situations that affect the student and the student’s family such as, for example, an elder college-bound brother or sister who has secured their first credit card and in a week-long spending spree immediately “maxed out” the credit limit. The topics include the actual cost to own a home, the ephemeral quality of paper money, the history of charging interest. The student will be given the opportunity calculate interest problems and discover the power of compounding interest. Rudolf Steiner’s insight into the value of teaching business math at this age can be summed up as follows: It is exceedingly important that we should not teach the children these concepts too late. If we teach these concepts too late, it means that we can count only on the children’s egoism. We do not yet reckon with egoism if towards their twelfth year we teach them something about the concept of the bill of exchange and so on and about the concepts of commercial calculation.

The Consequences of Usury

Usury is the charging of an exorbitant and unreasonable amount of interest. If someone loaned you ten dollars, and said to you, “I want twenty dollars in return,” you would probably respond “that is ridiculous—a hundred percent interest! Forget it!” But this begs the question of “what is a fair amount of interest that can be charged on a loan?”

In the holy book of Islam, the Koran, usury is strictly forbidden. Usury is also forbidden in the Bible in association with the prohibition of the eighth commandment (Mosaic codex) “thou shalt not steal.” The unethical practice of usury was first formulated by the Greek philosopher Aristotle: “the most hated sort of gaining of wealth is usury, which makes a gain out of money itself and not from natural objects [such as sheep and grain]. For money was intended to be used in exchange but not to increase interest.” Later in history, during the time of the Roman empire, laws were instituted placing a 12 ½ % limit on interest. Then, in the early beginnings of European civilization, Charlemagne’s laws flatly prohibited the practice of usury. The Church of the Middle Ages, through the declarations of Pope Innocent IV, also took a stand on this practice noting that if usury were permitted, rich people would prefer to invest their money in high interest loans rather than in agriculture and food production. Only the poor would do the farming, and without an investment in their work they would eventually fail, resulting in widespread famine. One of the greatest poems of world literature was written in these same times: Dante’s Divine Comedy. In this poem Dante travels through the worlds of the afterlife, first through the Inferno (hell), then Purgatory (purification) and finally ascends into Paradise (heaven). 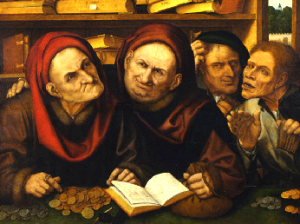 While traveling through the Inferno he descends through deeper and deeper levels of torment—the ninth level is the deepest abyss inhabited by those who were traitors during their life on earth. It is deep in the pit of hell on the seventh level that Dante encounters the usurers who sinned against the laws of a just economy. We see in the accompanying illustration, a rendition of usurers by the Renaissance artist Q. Metsys.

Parallel with Dante’s wondrous artistic imagination the great philosopher/theologian of the time, Thomas Aquinas, wrote that ”’it is in accordance with nature that money should increase from natural goods and not from money itself.” Curiously, even far later in time, in the United States, most of the state laws enforced limits on interest (no usury) until 1981.

We will study the historical period known as the European Renaissance next year, and one of the characteristics of that time was the emergence of a class of people who were merchants, traders, shopkeepers, bankers, tradesmen of all sorts, landlords, and owners of small farms and manors—this is what we usually refer to as the rise of the middle class. Before that, all the wealth of a region such as Rome or Burgundy belonged either to the nobles in their castles and fiefdoms, or to the clergy with their churches and monasteries; the peasants who farmed the land possessed very little wealth. But this emerging middle class thrived at this time, and many became so wealthy that before long, kings were borrowing money from the prosperous merchants and bankers, such as the Medici family in Florence. With this shift of wealth came a far looser interpretation of usury, for it became clear that a lender charging interest on a business loan where the borrower greatly prospered could no longer be condemned as greedy or unjust if he raised the interest rate. For often a merchant used the money to purchase goods in a region where they were plentiful, and then resold them at a profit elsewhere where those goods were in demand. Sometimes this merchant could double or triple the loan money. The lender wanted a bigger slice of the profit pie. That seems to be the common idea about charging interest in our contemporary world: high rates of interest should be charged on loans. [And we’re not saying that this is just or right.] In fact, in modern economies, one who simply saves their money rather than investing it is often considered either lazy or a fool: “he’s not putting his money to work, he’s letting it lay idle.”